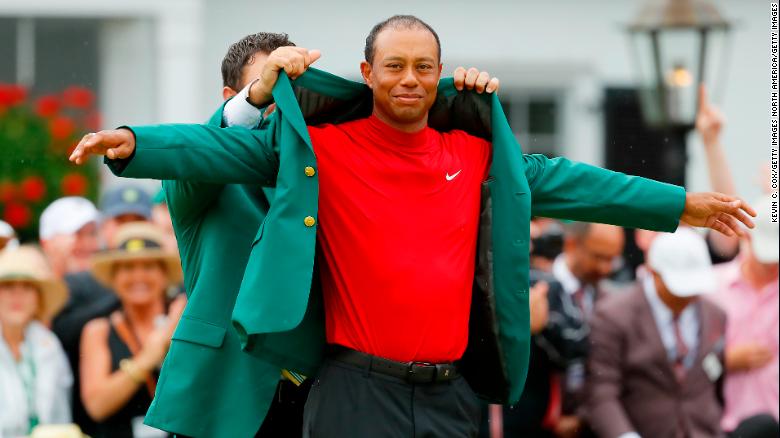 That is how Tiger Woods attempted to describe an extraordinary Sunday. A fifth green jacket, his first major win in 11 years; a story that the world had resigned itself to never seeing again.
It has already been coined by many as the greatest sporting comeback of them all — a journey that has included career-saving spinal fusion surgery and a tumultuous series of personal problems that threatened to bring an end to the career of a golfing icon.
As he completed a composed two-putt on the 18th for — almost certainly — the greatest bogey of his distinguished career, he thrust his arms aloft, his club above his head. He gave a trademark fist-pump, before taking the acclaim of his playing partners, all accompanied by a fervent roar from an adoring public.
Then, he found his family. It was an image for the ages — the completion of a cycle that many feared would never reach its natural end. Woods famously embraced his late father Earl after winning his first Masters in 1997. Now, Woods — the father — was embracing his children, his mother, his girlfriend and anyone else in his vicinity.
Read More

“I did the same thing to my dad and now I’m the dad with my son doing the same thing,” he reflected to CNN’s Andy Scholes. “It’s amazing how life evolves, changes. [Read More CNN.com]