Mrs. May said on Friday that she would step down as leader of the Conservative Party and then as Britain’s prime minister, after repeatedly failing to get her Brexit plan through Parliament.

“I have done everything I can,” Mrs. May said.

Facing a cabinet rebellion, Theresa May announced on Friday morning her decision to leave office. She spoke briefly after meeting with Graham Brady, a powerful leader of backbench Conservative lawmakers.

Standing in front of 10 Downing Street, Mrs. May said it was in the “best interests of the country for a new prime minister” to lead Britain through the Brexit process. She announced plans to step down as the leader of the Conservative Party on June 7, with the process to replace her beginning the following week.

“I feel as certain today as I did three years ago that in a democracy, if you give people a choice you have a duty to implement what they decide. I have done my best to do that,” she added. “I have done everything I can to convince MPs to back that deal. Sadly, I have not been able to do so.”

Mrs. May’s voice cracked as she said she was honored to serve the country as the “second female prime minister, but certainly not the last,” and said the role had been the honor of her life.

She will continue as a member of Parliament after stepping down as prime minister, the Press Association news agency has reported.

A turbulent term is coming to an awkward end.

Conservative lawmakers have been deeply frustrated by Mrs. May’s failure to deliver on Brexit, which became the government’s central — some would say its sole — preoccupation after the country voted to leave the union in a 2016 referendum.

But the breaking point has come at an awkward moment, with President Trump scheduled to arrive in Britain on June 3 for a state visit and to take part in events to commemorate the 75th anniversary of the D-Day landings that preceded the end of World War II.

Mrs. May’s ability to soak up political punishment and plow on regardless won her admiration, even from some of her many critics. But the pressure on her increased after disastrous local election results this month, when the Conservatives lost more than 1,300 seats in municipalities around the country and voters vented their frustration over the Brexit infighting and deadlock.

Then, the government announced that Britain would, after all, take part in elections to the European Parliament this week — another symbol of Mrs. May’s failure to achieve a withdrawal. Britons voted on Thursday, but the results will be announced on Sunday, after all the European Union countries have gone to the polls. They are expected to be catastrophic for the Conservatives.
Boris Johnson, the hard-line Brexit supporter and former foreign secretary, is one of the candidates to replace Mrs. May.CreditNeil Hall/EPA, via Shutterstock 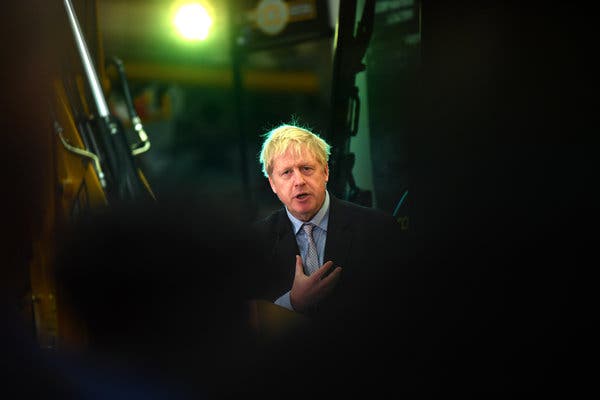 Conservative lawmakers have been positioning themselves for a leadership contest for months. Several were already campaigning actively before Mrs. May announced her decision to resign.

Candidates for party leadership have to be nominated by two other members of Parliament, though if there is only one candidate, he or she automatically becomes the new leader. If more than two candidates emerge, lawmakers vote among themselves to narrow the field and then put two candidates to a vote by all Conservative Party members, who number approximately 120,000.

The Conservative Party chairman, Brandon Lewis, said in a statement on Friday that lawmakers would begin their voting process on June 10, and that the new leader would be in place before Parliament’s summer break, which usually begins in late July.

Hard-line Brexit supporters will be determined to replace Mrs. May with someone from their ranks. The former foreign secretary, Boris Johnson; the former Brexit secretary, Dominic Raab; and Andrea Leadsom, who left her cabinet post as leader of the House of Commons on Wednesday, are seen as likely contenders.

But less ideological figures are likely to put themselves forward, too, including Jeremy Hunt, the foreign secretary, and Sajid Javid, the home secretary.

Britain has taken several economic hits recently, and business leaders are worried about the prospect of more gridlock in Parliament, potentially leading to a harmful “no deal” Brexit on Oct. 31.

“There are only five months before Britain crashes out of the E.U. without a deal, causing prices to rise and reducing the availability of many goods on the shelves,” Helen Dickinson, chief executive of the British Retail Consortium, said in a statement.

Carolyn Fairbairn, director-general of the Confederation of British Industry, said “Winner-takes-all politics is not working,” and chided those jockeying for position.

“Nation must be put ahead of party, prosperity ahead of politics,” she said in a statement. “We call on politicians from all parties, on all those ambitious to lead, to take this chance for a fresh start.”

Despite such concerns, British stock rose slightly on Thursday.

A number of businesses, wary of Brexit and the uncertainty surrounding it, have already moved some operations out of Britain.

For months, retailers stockpiled goods ahead of previous Brexit deadlines for fear that traffic jams and issues at the border would prevent food from getting into the country. Britain imports about half its food from or via the European Union.

Margaret Thatcher exiting the gates of Buckingham Palace in 1990 after telling Queen Elizabeth II about her resignation plans.CreditMalcolm Linton/Associated Press 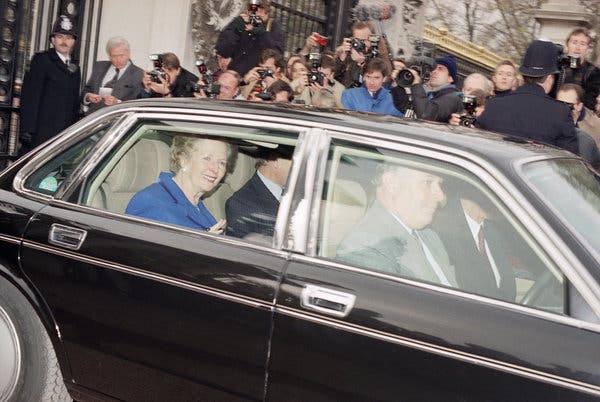 Throughout Mrs. May’s protracted fall, Conservative lawmakers were eager to avoid being seen as the proverbial “men in gray suits” ushering out Britain’s second female prime minister, even as they worked hard behind the scenes to do just that.

The party suffered after being seen to humiliate Margaret Thatcher, Britain’s first female prime minister, when she was forced out in 1990. But in the last days before Mrs. May announced she would resign on Friday, the echoes were hard to avoid.

[A tearful photograph of Mrs. May summoned echoes of Mrs. Thatcher’s last days in office. Read more about Mrs. May’s strengths, and her downfall, here.]

Lawmakers raised the prospect of Mrs. May’s husband, Philip, intervening, much as Ms. Thatcher’s husband, Denis, was famously said to have urged her to stand down.

Iain Duncan Smith, a prominent Brexiteer and former Conservative party leader, said in a radio interview about Mrs. May: “The only person closest to her is clearly her husband, and I think somebody has to say, ‘Look, nobody likes this.’”

A British tabloid, Metro, played up those appeals with the headline, “Just Tell Her Phil.”

Dominic Raab, the former Brexit secretary who would like to take Mrs. May’s place, described her statement as “dignified.”CreditSimon Dawson/Reuters 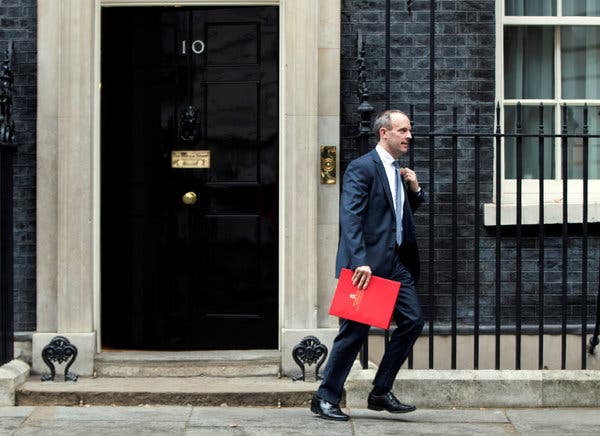 It has been a long time since so many prominent political figures had nice things to say about Mrs. May.

Compliments poured in from opposition lawmakers who have tried to oust her, and from fellow Conservatives who have undermined her and hope to take her place. Some were backhanded, some barbed, and still others gave no hint of the history of animosity behind them.

“Thank you for your stoical service to our country and the Conservative Party,” tweeted Mr. Johnson, who quit Mrs. May’s cabinet over Brexit and who has never concealed his ambition to be prime minister.

A very dignified statement from @theresa_may. Thank you for your stoical service to our country and the Conservative Party. It is now time to follow her urgings: to come together and deliver Brexit.

Nicola Sturgeon, first minister of Scotland and leader of the Scottish National Party, retweeted Mr. Johnson with the comment, “What a hypocrite.”

Two other Conservatives who quit Mrs. May’s cabinet over Brexit and would like to take her place, Mr. Raab and Ms. Leadsom, described her statement as “dignified.”

“An illustration of her total commitment to country and duty,” Ms. Leadsom tweeted. Mr. Raab wrote, “She remains a dedicated public servant, patriot and loyal Conservative.”

The statement from Tom Watson, deputy leader of the opposition Labour Party, was no bouquet, saying that Mrs. May “had an unenviably difficult job, and she did it badly.” But even he added, “she tried to do what was right for our country,” and was “honorable in her intentions.”

Jeremy Corbyn, the Labour leader, dispensed with any pretense of a tribute. “She’s now accepted what the country’s known for months: She can’t govern, and nor can her divided and disintegrating party.” 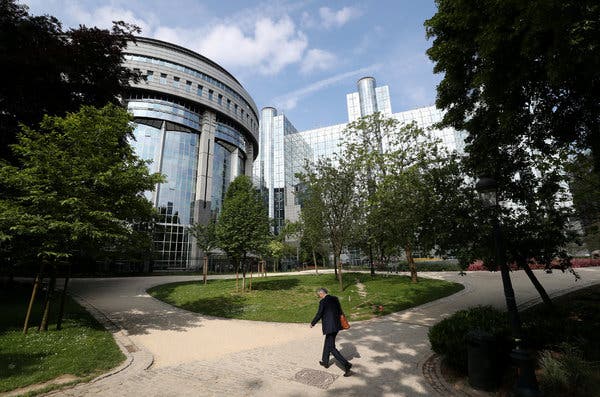 European Union officials worry about what comes next, but they insisted that their position on Brexit would not budge.

The bloc’s leaders did not want Britain to leave, but they remain committed to the withdrawal agreement Mrs. May negotiated, even if the next prime minister is a hard-line Brexiteer who tries to drive a harder bargain.

“We are ready, we have been ready, we continue to be ready whatever the scenario is,” said Mina Andreeva, a European Commission spokeswoman. But, she added, the commission would prefer “an orderly withdrawal on the basis of the withdrawal agreement that has been negotiated with the U.K.”

“Whatever comes next won’t be very helpful, I think,” he added.

The view from Brussels is that the choices remain the negotiated deal, an economically damaging “cliff edge” Brexit without a deal, or no Brexit at all.

“Brexit is a total disaster,” said Manfred Weber, leader of the European People’s Party, the largest bloc in the European Parliament, who is a candidate to succeed Mr. Juncker. “I appeal to the UK’s sense of responsibility and leadership in these times of great uncertainty.”

A pro-Brexit rally near Parliament in London in June 2016, before the referendum.CreditAdam Ferguson for The New York Times 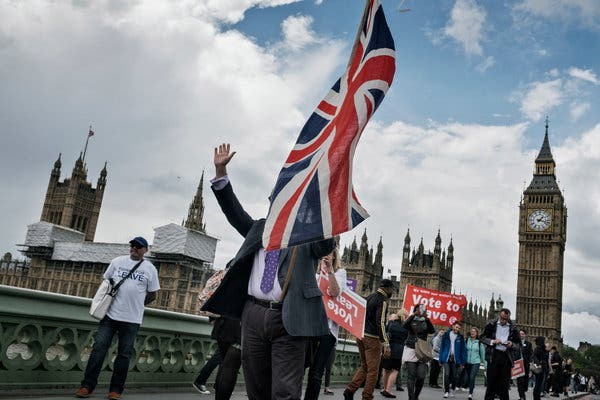 David Cameron, the prime minister who called the 2016 referendum and campaigned to remain in the bloc, resigned the day after the vote. Mrs. May had also argued for remaining, but after emerging victorious from a brief but chaotic leadership contest, she appointed a cabinet with several leading Brexit campaigners and set out an agenda that implied a comprehensive break with the bloc.

She then gave herself a two-year legal deadline to complete withdrawal negotiations, only to have to postpone Britain’s exit twiceafter failing to persuade Parliament to accept the terms she had negotiated, painstakingly, with the European Union.

What Is Brexit? A Simple Guide to Why It Matters and What Happens Next

The basics of Brexit, the troubled plan for Britain to quit the European Union.

Her authority was profoundly undermined in 2017, when she unexpectedly called a general election, then conducted a poor campaign and lost the majority in Parliament that she had inherited from Mr. Cameron. The Conservatives remained in power with the support of a small Northern Ireland party.

Time and time again, Mrs. May survived challenges to her leadership, escaping a seemingly inevitable end to her tenure as her Brexit plans repeatedly foundered.

Her hopes of trying once more to push her deal through Parliament on a fourth attempt were dashed after changes she unveiled on Tuesday, which opened the door to a second referendum on Brexit, were rejected by Brexiteers as a betrayal and by Remainers as simply not enough. Mrs. May had framed the changes as “one last chance” to deliver on the 2016 vote to leave the European Union.

Plans to publish her new plan on Friday were quickly shelved when it became clear they managed to alienate pro- and anti-Brexit factions alike.