A Brazilian woman who has accused Neymar of rape has broken her silence to provide a detailed account of the evening she spent with the Brazilian soccer star to reaffirm her allegations against him.

In a television interview with Brazilian station SBT broadcast Wednesday, 26-year-old Najila Trindade said she had been left “traumatized,” accusing the Paris Saint-Germain forward of raping and violently assaulting her.
Neymar, the world’s most expensive soccer player, has previously denied all the allegations against him, and has called the incident, “a trap.”
CNN has contacted Neymar and PSG for comment on the allegations made by Trindade in the interview, but has yet to receive a response.
Speaking on Wednesday, Trindade, who met Neymar on May 15 in Paris, says she contacted him on Instagram, intent on pursuing a sexual relationship with the soccer star.
“There was a sexual intent, it was a desire of mine. I think that was clear to him. And he asked when I could go and I said at that moment I couldn’t, for financial reasons, I couldn’t go, and also because of my schedule at work.
“And so he suggested “well, but I can solve that” and I went. With money … with the ticket,” she told Brazil’s SBT. 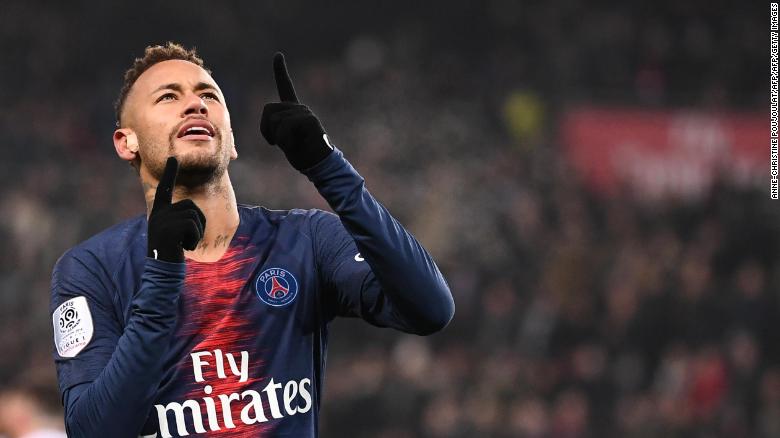 Neymar plays for French club Paris Saint-Germain.
Trindade says she met Neymar at the Hotel Sofitel Paris Arc Du Triomphe.
“I had the desire of being with Neymar and when I got there everything was good, everything was fine, the messages, I was going to succeed, do you understand? But when I got there he was aggressive, totally different from the guy I met through the texts.
“Still, to that point it was fine. Because I really wanted to be with him, I thought, let me try to get a handle on this. And we started to caress each other, to kiss each other and then he undressed me,” she said.
She says that after warning him that she would not have sex without a condom he began to violently restrain her in order to have intercourse with her without using a prophylactic.
Trindade says she asked Neymar to stop but he refused.
“From the moment that he held me, violently hitting me, he was forcing me to stay there, in that place,” she said.
“I don’t think that just because I was keen to be with him that he had the right to do that to me,” she told SBT in Brazil.
Neymar has strenuously denied allegations against him, publishing text messages and photos, on Instagram, he said prove he was set up, and his representative claimed he was the victim of attempted extortion.
“I’m being accused of rape,” the Paris Saint-Germain player said in a video published on his Instagram account last week. “Yes, it is a heavy word, a very strong thing,” he said in Portuguese.
“What happened was totally the opposite of what they are talking and saying,” Neymar said. “I’m very upset at this moment.”
“This is a very unpleasant situation, not only for myself but also for my family. For putting them in this situation, because I really didn’t want to, I was induced to do it, it was something that happened, it was a trap and I ended up falling for it, but that’s a lesson from here on out.”
The video has since been taken down.
The woman left Paris on May 17 and waited to file a report in Brazil because she “was quite emotionally shaken and scared of registering the facts in another country,” the police report said.
Police in Paris have not responded to CNN’s calls regarding the alleged incident. The Paris prosecutor’s office say they have not opened an investigation.
In his Instagram video, an emotional Neymar contended that his encounter with the accuser was “a relationship between a man and woman, within four walls, something that happens with every couple,” but also that he had been set up. “It was a trap, and I ended up falling for it.”
Neymar’s representative, NR Sports, said in a press release, last week, that the player “was a victim of attempted extortion, practiced by a lawyer from the city of Sao Paulo, who, according to his version, represented the interests of the alleged victim.”
In Wednesday’s TV interview, Trindade says she has no desire for financial compensation and is only “pursuing justice.” She also says that her first lawyer dropped her case after she went to the police to pursue her complaint against his advice.
CNN has been unable to reach that attorney for comment. It is not known if she has new representation.
Neymar ended his Instagram video showing flirty and at times explicitly sexual texts and intimate photos that he said were exchanges with his accuser even after the alleged incident. The exchanges began in March, according to the time stamp on the texts.
“I will expose everything, expose all the conversations I had with the girl, all our moments, which are intimate … but it is necessary to open and expose them to prove that nothing really happened,” he said.
Two days after Trindade filed the report, he took to social media, strenuously denying her accusations and sharing a sexually charged text exchange between the pair that he claims continued after the alleged assault, he says proving the consensual nature of their relationship.
When asked about why she continued to message Neymar after the alleged rape, Trindade said: “Initially, I wasn’t able to react, due to the trauma.
“And then I knew that if I didn’t speak to him normally, pretending that I hadn’t understood what had happened, he wouldn’t speak to me again and I wouldn’t have how to prove what he had done to me.”
The latest allegations came on the same day Neymar was ruled out of the Copa America, South America’s showpiece international tournament, after sustaining an ankle injury during Brazil’s 2-0 warm-up win over Qatar in Brasilia. 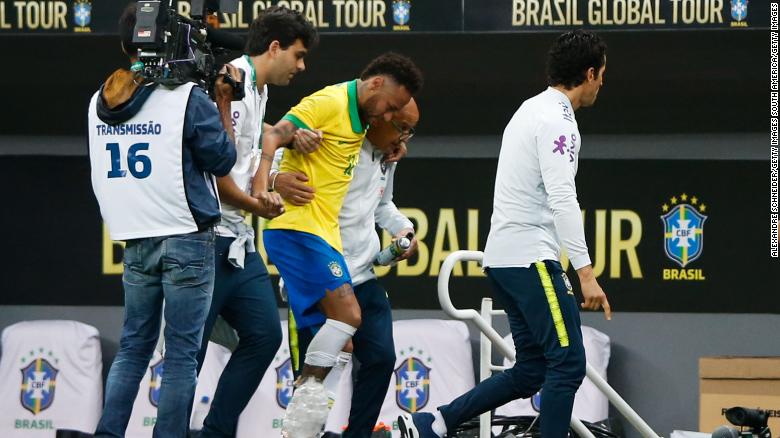 Neymar limped off during Brazil’s 2-0 win over Qatar in Brasilia.
Visit CNN.com/sport/football for more news and features
Neymar was seen walking with crutches with heavy ice packaging around his left ankle before being taken to hospital where he was visited by the country’s president Jair Bolsonaro.
The injury is the latest setback in a forgettable season for Neymar, who was stripped of the Brazilian captaincy last month following disciplinary issues.
He was banned for three matches by French football authorities last month after a video posted by a spectator at the Coupe de France final appeared to show him striking a fan after a brief confrontation. PSG had said it would appeal the ban.
The striker was also banned from European competition by UEFA for an Instagram post criticizing match officials in charge of the French club’s Champions League defeat to Manchester United in March.
Neymar, incensed that a last minute penalty was awarded to United using the Video Assistant Referee (VAR) system, will serve a three-match suspension next season as punishment.
Per: CNN