Australian authorities made the country’s largest onshore methamphetamine seizure when police found 1.6 tons of drugs hidden in a shipment of stereo speakers from Thailand, the federal agency announced on Friday.

Australian Border Force (ABF) officials discovered the drugs when crews X-rayed the packaged boxes of speakers and anomalies were detected. A total of nearly 1.6 tons of meth, which officials said is equal to almost 16 million drug deals, was recovered from the cargo shipment at the Melbourne Container Examination Facility. 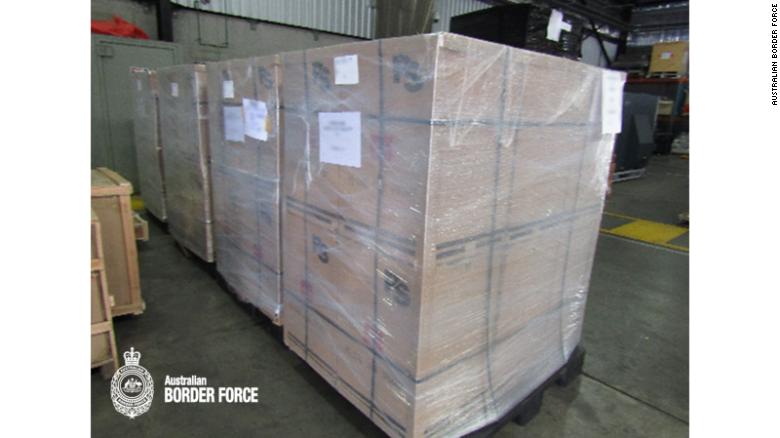 The speakers were packaged and sealed in a cargo shipment.
“This is the largest meth bust we’ve ever seen in this country, and demonstrates not only the brazen nature of those involved in this criminal activity, but the resolve of the ABF in Victoria and around the country to stop these imports,” Craig Palmer, ABF Regional Commander Victoria, said in the statement.
Authorities said the record drug bust had an estimated street value of $1.2 billion Australian dollars, which is equivalent to $837 million US dollars. Along with meth, 37 kilograms of heroin was also found stashed in vacuumed-sealed packages inside the speakers.
“Last financial year the ABF made 43,000 detections of illicit drugs weighing more than 11.8 tons — so this seizure is equal to more than 13% of the total drugs we seized last financial year,” said Palmer.
At this time no arrests have been made as the investigation continues.
“The effect of these drugs on the community and families would have been profound,” said Peter Bodel, Australian Federal Police Acting Commander, in the statement. “It may be your loved one, a friend or neighbor who has been spared the terrifying impact of this mammoth shipment.”
In January, US authorities confiscated almost a billion dollars’ worth of methamphetamine bound for Australia, in the largest-ever seizure of the drug on American soil, Australian police announced after a joint operation. In that seizure, the drugs were found hidden inside electronic equipment.
Per: CNN