Nike has recalled a shoe featuring the Betsy Ross flag over concerns that the design glorifies slavery and racism. The red, white and blue sneaker had been set to hit the U.S. market to commemorate the July Fourth holiday.

“Nike has chosen not to release the Air Max 1 Quick Strike Fourth of July, as it featured an old version of the American flag,” the company told NPR on Tuesday. Nike did not immediately respond to questions about the thinking behind the original design.

It released a statement saying, “We regularly make business decisions to withdraw initiatives, products and services. NIKE made the decision to halt distribution [of the shoe] based on concerns that it could unintentionally offend and detract from the nation’s patriotic holiday.”

The special Air Max 1 design — which includes an embroidery of the famous flag featuring 13 stars for the original 13 colonies — drew complaints that it celebrates an era in U.S. history when slavery was legal and commonplace. While the flag’s defenders say it has a place in history, critics say it has become a symbol of extreme views. 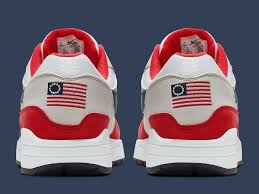 Those critical of the Nike shoe include activist and former NFL quarterback Colin Kaepernick, according to The Wall Street Journal. The newspaper says Kaepernick asked Nike to reconsider the design out of concern that it would send the wrong message about race in the modern United States.