Meghan McCain, feeling dejected and sabotaged by her colleagues at ABC, is seriously thinking about departing “The View,” two people familiar with the matter told CNN. One of the people, who is a friend of McCain, and who like others spoke on the condition of anonymity, told CNN Business that McCain “doesn’t think it’s worth it anymore.” The friend added that McCain’s contract is coming up for renewal later this summer, though that timeline was disputed by a well-placed person at ABC. A senior ABC employee who also spoke to CNN Business said McCain is “miserable” at the network. News of McCain’s possible departure was first reported Wednesday morning by The Daily Beast, which detailed behind-the-scenes drama at the daytime program. The website cited sources who characterized her as “exhausted and defeated” and said she was seriously considering exiting the show. 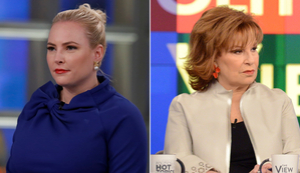 But not everyone thinks McCain will actually call it quits. A television executive associated with the show who spoke to CNN Business suggested the leaks about her possible departure was a contract negotiation strategy. When asked for comment, a spokeswoman for the show said, “The co-hosts and The View have had an incredible season and we expect them all back for an epic year ahead.”
“Expect” is an interesting word choice as it doesn’t mean that all of the contracts have been worked out yet.
The people who spoke to CNN Business backed up reports about tensions behind the scenes at the famously drama-filled talk show.
McCain is particularly concerned about a parade of anonymous leaks that seem intended to hurt her, the friend said.
McCain believes ABC should be doing more to defend her.
But the senior ABC employee told CNN Business that ABC has gone “above and beyond” to support McCain.
The television executive echoed that, and said that any suggestion otherwise is nonsense.
McCain has not recently appeared often on ABC’s other shows “Good Morning America” and “This Week,” to the dismay of some news division staffers and despite network management encouraging her to do so, the senior ABC employee told CNN Business. McCain joined “The View” in 2017, replacing Jedediah Bila as the conservative voice on the program and quickly becoming a lightning rod. Along with McCain, “The View” is co-hosted by Joy Behar, Abby Huntsman, Sunny Hostin and Whoopi Goldberg. McCain regularly clashes with her co-hosts, and the on-air conflicts have gone viral on social media, generating numerous headlines.
But ABC doesn’t necessarily view that as a bad thing, the television executive who spoke to CNN Business said. Instead, for now, the television executive said ABC is thought to enjoy the buzz that the skirmishes bring to the show.
PER: CNN