A man who called police on a black man on the Fourth of July said he did not want to unfairly target the man based on his race. Christopher Cukor, speaking of his encounter with Wesly Michel, said “past experiences and fears” can cloud someone’s intentions.

“I’m sorry my actions caused Wesly to feel unfairly targeted due to his race,” Cukor said Tuesday in a statement posted on Medium. 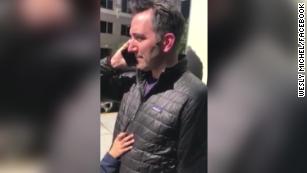 Cukor identified himself as the man on a video shared by Michel that has garnered more than 1.2 million views. In the video, a young boy came to the defense of Michel, who is black, as the boy’s father questioned and later called the police on him after he said he was waiting for a friend at a San Francisco apartment building. During the three-and-a-half-minute recording, the boy can be heard pleading with his father not to call police on Michel, whom the father says is a “trespasser” in his building.
Cukor said he reacted based on his past history. His father was killed when he confronted a trespasser outside his home, he wrote. “For my child’s safety, my safety and that of the building, I felt it was necessary to get help in this situation,” he said. “Furthermore, I’ve encountered trespassers in my building and we’ve been robbed several times. This is not uncommon in San Francisco and the bad actors are all different colors.”

Living while black
“I now realize that Wesly was reacting based on his unique history as well. Unfortunately, there is a terrible pattern of people calling the authorities regarding people of color for no other reason than their race.”
CNN has attempted to reach the man in the video. Michel, 35, a software engineer, has told CNN the incident, “mirrors the experience that African Americans endure daily where we are questioned on whether we belong.” “I videotaped this incident to protect myself and to support my story should police get involved,” Michel said.

‘Daddy look what you’ve gotten us into’

The video begins as the man asks Michel to identify the person he is there to see and to “please call your friend on the call box and have them come down and get you.”
Michel declines. “They don’t have to do that. You can just walk away,” Michel responds.
The man, who appears to be holding open the door to the building during the conversation, tells Michel he’s going to call the police. “Daddy don’t!” the child says as the man pulls out his cell phone. 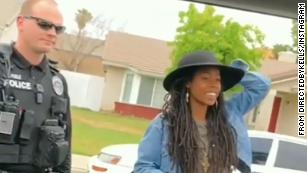 Woman says she called police when black Airbnb guests didn’t wave at her
Michel welcomes the call and reminds the man that he is being recorded. Michel told the man that if he calls the police he’ll be the “next person on TV,” “You’re just gonna be the next person on TV, just remember that and you have your son with you,” Michel tells the man, alluding to viral videos in which police were called on black people for mundane things like taking a phone call in a hotel lobby, waiting for a friend at starbucks or working out at a gym. The man calls the police and tells them that Michel is a “trespasser,” who “tailgated” into the building, walking in as he was walking out.
As the man talks to police, his son begins pleading with him to leave and to not call police. “Dad, don’t. Please go,” the boy says. “Daddy go. It’s the better; I agree with him, daddy.” The boy begins to cry as his father describes Michel to police.
“Daddy, I don’t like this. Let’s go,” he says. 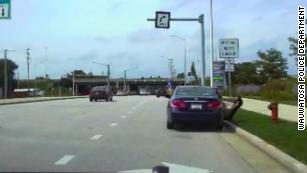 “Listen to your son, walk away,” Michel says. “I will stop this. I will stop the recording.”
Michel’s friend walks up as the man is on the phone with police. The friend appears to come from outside the building. “Told you. Let’s go now,” the young boy says and begins pulling his dad. “Daddy, look what you’ve gotten us into. Let’s go!” The man asks for confirmation that the resident is Michel’s friend and ends his call with police after telling them that Michel is “actually here with a resident.” Police do not appear to respond to the scene.
The man asks Michel to stop recording, but he continues anyway. “Now you’re online forever,” Michel said. Michel says he “could never have imagined” how quickly his instincts to protect himself would arise. “I believe that ultimately everyone wants to be seen for who they are and not prejudged,” he said. “I’m an American, a brother, a son and an ambitious Engineer who loves to code and wants to greatly contribute to the tech world in (San Francisco), a city that I love.”
https://youtu.be/LE_uJFC8INE
Per: CNN