Dead gray whales keep showing up along the west coast of North America, from Alaska to Mexico, and it has become a concern for marine biologists.
And you guessed it: The climate crisis is theorized as the leading cause for these deaths.
Over the July 4 weekend, seven dead gray whales were discovered in Alaska: four near Kodiak Island, two at Egegik and another at Takli Island.
These findings raise the death toll for gray whales in Alaska to 22 this year.
The National Oceanic and Atmospheric Administration declared an unusual mortality event for gray whales on May 31.
The criteria to define an unusual mortality event
According to the Marine Mammal Protection Act, an unusual mortality event is defined as “as a stranding event that is unexpected, involves a significant die-off of any marine mammal population, and demands immediate response.” A set of seven criteria has been developed to determine such an event, and at least one of the seven must be met for an official declaration. “We have already exceeded the 1999 number of gray whale mortalities along the U.S. West Coast, including Alaska,” NOAA public affairs officer Julie Speegle wrote in an email. “In 1999, there were 91 gray whale mortalities (including 12 in Alaska). So far in 2019, the total for the U.S. West Coast (including 22 in Alaska) is 96. Only time will tell if we will approach the numbers for 2000 (U.S. West Coast 131, including 45 in Alaska).”
Gray whales migrate in the summer from warm breeding lagoons near Mexico to feeding grounds in the Arctic. They can grow as large as 90,000 pounds, and during feeding season, they typically eat up to 1.3 tons of food per day.
Many of the gray whales were found malnourished, which leads scientists to believe that they are not eating enough. 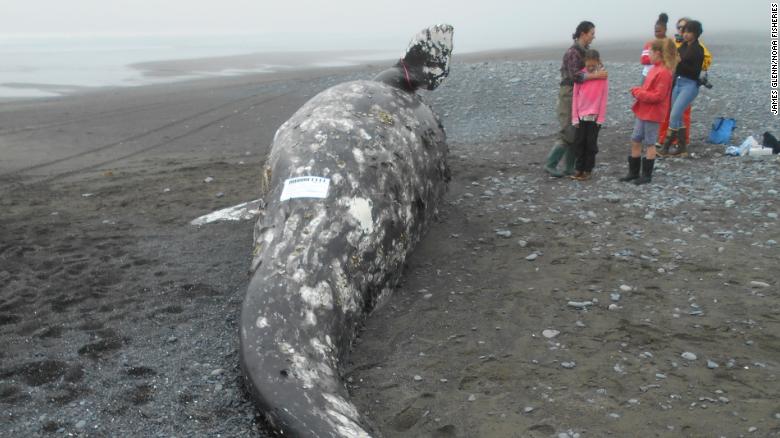 Alaska’s 16th dead gray whale of 2019 was found stranded on Kodiak Island.
“Scientists theorize there may have been a disruption in the gray whale food source due to a lack of sea ice in the Arctic last summer,” Speegle said. “Gray whales fatten up during the summer by feeding on marine life, mostly amphipods off the ocean floor. But when sea ice melts and retreats (as it did last summer), there is a disruption in the food web that results in fewer amphipods for gray whales to eat.” Gray whales were on the endangered species list until 1994. Even with the latest unusual mortality event, the eastern North Pacific population of gray whales has thrived, reaching a population of about 27,000 whales, according to NOAA.
Per:CNN