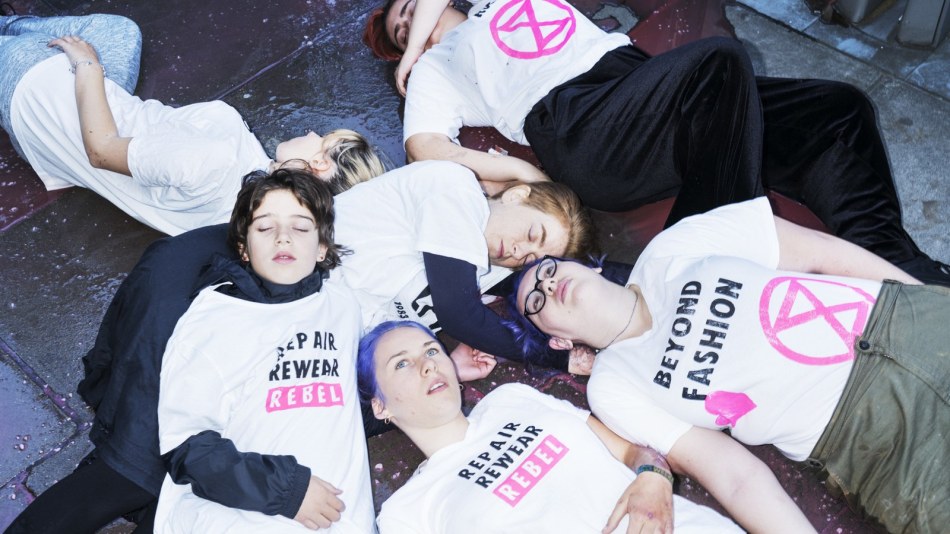 Earlier this summer, the Extinction Rebellion group urged citizens to “boycott fashion” by refraining from buying new clothing for a year, an effort to address the staggering excesses of global production. An estimated 100 billion pieces of clothing are made every year, with a truckload being burned or landfilled each second, according to Stella McCartney.

XR’s latest action is even more radical: In July, the group petitioned the British Fashion Council to shut down LFW and plan a people’s assembly instead, so members of industry could gather to declare a climate emergency and figure out viable solutions. That didn’t happen and the shows are going on as planned. Now XR is organizing protests throughout the city. On the first day of LFW, protestors covered in fake blood staged a “die in” outside The Strand, symbolizing the lives already lost and that will be lost due to climate change, and on the last, they’ve planned a “funeral procession.” Immo Klink is on the ground documenting it for Vogue.

The actions are coming at a time when designers large and small are addressing their environmental impact. Earlier this week, Gucci announced it will have a fully carbon-neutral supply chain by the end of this month, and New York designers including Gabriela Hearst, 3.1 Phillip Lim, Collina Strada, and CDLM made sustainability a big part of their Spring 2020 stories.

If designers are improving the way they make clothes, why does XR still believe fashion week needs to be cancelled? In short, it’s fashion week’s overarching message of new, new, new. “During fashion month, the industry travels to global destinations to parade, see, and buy fashion, [and] it creates the desire that results in the consumption of fast fashion and beyond,” XR wrote on its Facebook page. “Fashion should be a culturalsignifier of our times, and yet the industry still adheres to an archaic system of seasonal fashions, doing pressure to relentlessly create new fashion from new materials.”

It’s hard to imagine fashion week disappearing, but who knows? This season’s shows have already prompted questions about how we should engage with fashion, with designers staging major, celebrity-studded events in lieu of runway shows or stepping away from the catwalk entirely. Plus, XR ostensibly knew the industry wouldn’t warm to their ideas right away; the goal right now is to simply get the right people talking about it. “I think it’s important we use our voice to say what we believe is necessary rather than what we believe is achievable within the current system,” Tori Tsui told Vogue. “People might say it just isn’t realistic [to cancel fashion week]. But that isn’t the point. It’s to make people understand what’s necessary in this emergency.”