Tesla’s stock enjoyed its biggest spike in six years this week after the automaker reported an unexpected third quarter profit. But that might not have been the biggest achievement for the company. What could end up being far more important is that the Model Y, the electric car company’s lower priced SUV, is now due to go into production by next summer. It had previously been projecting to start production in the fall of 2020.

“There may be some room for improvement there, but we’re confident about summer 2020,” said CEO Elon Musk about the company’s new time frame. If that doesn’t seem like that big of a change, keep in mind two facts about Tesla (TSLA) and the Model Y.
First, the company’s track record of meeting internal deadlines for rolling out new cars has been particularly bad. At times, it has been years late in delivering promised production of new vehicles. Moving a deadline up, not back, is big news at Tesla. 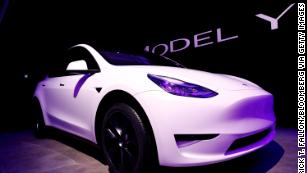 The Tesla Model Y, now due to be available next summer. And second, the Model Y is by far the most important vehicle Tesla has planned so far. Tesla has basically been depending on the sedans — the Model S and Model 3 — for the overwhelming majority of its sales. But US car buyers have been moving away from sedans at top speed — and towards SUVs. “It’s the body style of choice,” said Michelle Krebs, senior analyst with Cox Automotive.
US sedan sales have fallen sharply, down 40% in just the last five years. Most of those sales have shifted to SUVs. But so far Tesla’s only SUV is the luxury-priced Model X. Even Musk conceded this week both the Model X and Model S are nothing more than niche products, and not that significant to the company’s future. “I mean, they’re very expensive, made in low volume,” he said. “To be totally frank, we’ll…continuing to make them more for sentimental reasons than anything else. They’re really of minor
importance.” 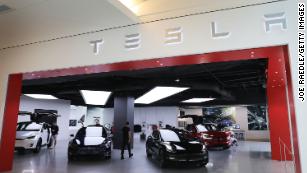 Tesla delivery numbers fall short of Musk’s 100,000 target
Musk has suggested that the Model Y will have sales about 50% above those of the Model 3, maybe double. If he achieves that, the Model Y will have a chance to become the bestselling SUV of any kind — gas or electric — in the United States, a title currently held by the Toyota Rav 4, which had US sales of 427,000 last year. It’s also the segment of the market where established automakers are concentrating their electric vehicle offerings. So if Tesla is going to be able to respond to the growing lineup of electric cars from other manufacturers, it’s going to need SUVs.
Krebs said even with the competition from other electric SUVs, the Model Y will be well positioned in the market due to Tesla’s reputation. “The one thing no one can compete with Tesla on is the mystique of the brand,” she said. “When we look at consumer perception of various brands, there is no one that comes close on brand strength. It’s very aspirational.” That’s why the Model 3 has been able to buck the trend of moving away from sedans, she said. “They [customers] buy it not because they want a sedan, they buy it be because it’s a Tesla they can afford,” she said.
While Tesla has yet to give any details on Model Y pricing, it is expected to eventually be available for just under $40,000, far closer to the Model 3 than the Models S and X.
The question, of course, is will Tesla be able to stay on its new, more ambitious schedule for starting mass production of the Model Y, building more than 1,000 a week by next summer? 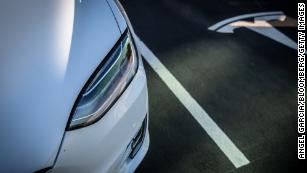 ‘Terrifying but fantastic:’ New Tesla feature sparks awe and mayhem
Musk insisted this week that he’s learned a lot from past delays and missed deadlines. And he points to the company’s new plant in Shanghai, which went essentially from starting construction to the starting production, in only 10 months. “Gigafactory Shanghai will become a template for future growth,” Musk promised. So if the company is able to stick to this new ambitious schedule and hit the even more ambitious sales target Musk has set for the Model Y, profitable quarters like the one he just reported won’t be a surprise for much longer.
Per: CNN