When a roaring wildfire approached Janet and Dan Condron’s door in Santa Rosa, California, in 2017, they were certain their home would be destroyed. The retired couple decided to evacuate.

That’s when an unexpected firefighting crew appeared on their cul-du-sac and got to work, creating a break in the fire that ultimately saved the Condrons’ home.
These firefighters weren’t from the fire department — they were from a nearby correctional facility.
“I don’t think we would still have our homes if it wasn’t for those 26 individuals,” said Dan Condron.
Prisoners on the front lines
California employs about 3,100 inmates as part of the state’s Conservation Camp program, which provides critical support to state and federal agencies responding to emergencies such as wildfires, floods and other disasters. About 2,150 of those inmates are authorized to fight fires.
As multiple fires rage across California, the role firefighting inmates play is coming under renewed scrutiny. Despite their extensive training and heroic efforts in times of crisis, these inmates are often denied roles in fire departments after they’re released because of their felony records.
“These inmates go through the training and then they want to go on and pursue additional training and that door is closed to them,” says Mark Farouk, a spokesman for California Assemblywoman Eloise Reyes, who earlier this year introduced a bill that seeks to ease restrictions on ex-convicts. The bill has stalled in the state government, but may be considered again in January, Farouk says.
Currently, most fire departments require candidates to have an EMT license, which Farouk says is extremely difficult to acquire with a felony conviction. Reyes’s bill aims to provide a path for former inmates to become professional firefighters after their release. 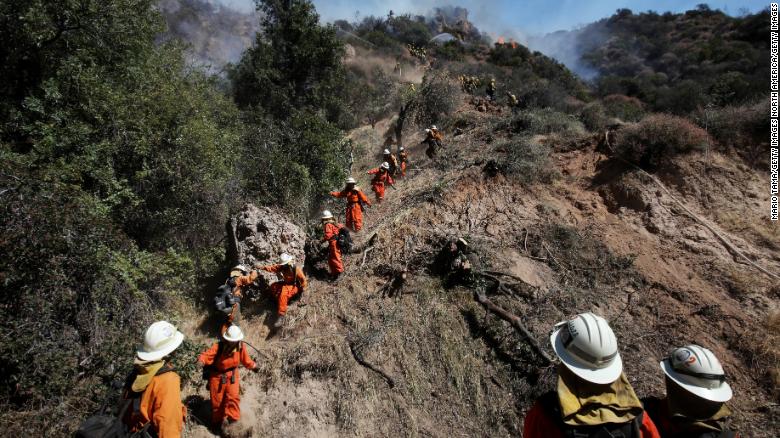 An inmate firefighter crew works in Los Angeles’ Pacific Palisades neighborhood in October.
On-the-job training
Under the Conservation Camp program, which is jointly run by the Department of Forestry and Fire Protection and the Los Angeles Fire Department, only low-security prisoners with a record of good behavior are eligible. Those who volunteer receive the same entry-level training that the state’s seasonal firefighters receive. The inmates work long hours, earning between $2.90 and $5.12 a day, and an additional $1 an hour when they’re battling fires. The wages are higher than most other prison jobs, but come with significantly greater risk. Since 1983, at least six incarcerated firefighters have died on duty.
“I could be sitting behind the [prison] wall right now, dealing with all the drama that that entails, or I could be out here helping save this part of California because of this disaster,” former inmate firefighter Daniel Erickson told NPR last year.

The need for firefighters will only grow as the climate crisis makes wildfires in the Golden State more intense. On Wednesday, there were more than 26 million people from California to Arizona under red flag warnings as firefighters combatted multiple blazes including the Kincade Fire in Northern California and the Tick and Getty Fires in Southern California. The California Department of Forestry & Fire Protection, or CalFire, called climate change “a key driver” of the trend of longer fire seasons.
“It’s been clear to [Reyes] that climate change is contributing to these extreme weather events,” Farouk said. “We definitely need more firefighters and folks that are willing to put themselves in harm’s way.” 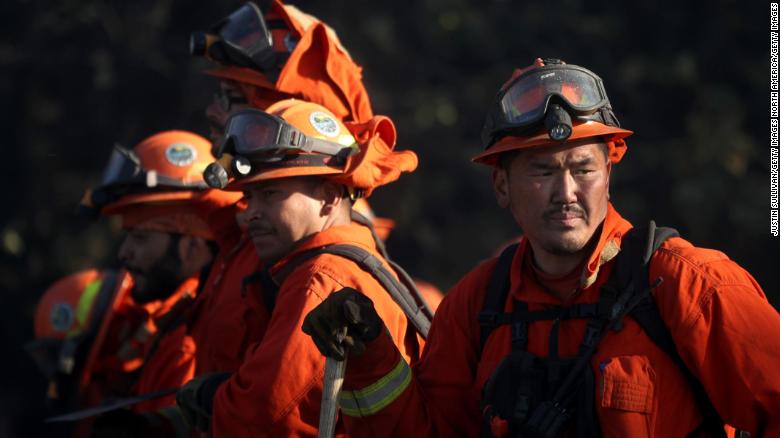 Inmate firefighters take a break while battling the Kincade Fire this week in Healdsburg, California.

A way to serve

Last month, Gov. Gavin Newsom signed legislation that will help former prisoners assist in emergency response units, but stops short of allowing them to become full-fledged firefighters.
“Inmate fire crews consist of men and women who have trained through a special program and risk their lives to protect the public,” said Assemblywoman Wendy Carrillo, who authored the bill. “Once an individual has paid their debt to society and served their time, they should be able to reintegrate back to society and have an opportunity for a good job and live a stable life with dignity.”
But some say the law doesn’t do enough to fix the problem. “This is a bill that puts lipstick on a pig and doesn’t tackle the real problem,” says Katherine Katcher, the founder of Root & Rebound, an advocacy group for former inmates.
California has plenty of applicants for fire department jobs, says Carroll Wills, a representative for California Professional Firefighters, an advocacy group. But the state needs more people who can assist in emergencies by clearing brush and trees.
“As these incidents become more frequent and more dangerous, additional resources are necessary,” Wills said.
Per: CNN