The Washington Nationals have clinched their first World Series title after defeating the host Houston Astros 6-2 in Game 7 on Wednesday night at Minute Maid Park. This is the first time in World Series history that the road team has won every game. Anthony Rendon and Howie Kendrick homered to power the Nationals, who had finished the regular season as a wild-card team. “There’s guys that in a big moment you want up there,” Nationals Manager Dave Martinez said. “They’ve come through all year long for us in big ways. They have the knack to stay calm and do what they need to do.”

Starter Max Scherzer kept the Nationals in the game, throwing five innings and giving up two runs. Patrick Corbin, a starter turned reliever for this game, pitched three scoreless innings to earn the win. Daniel Hudson pitched a perfect ninth to earn the save. Astros starter Justin Verlander delivers a pitch in the first inning of Game 6. Verlander, one of the most dominant pitchers of his generation, fell to 0-6 in seven World Series starts. Nationals win first World Series title Washington players react in the dugout during the ninth inning of Game 5. The Nationals lost 7-1 to fall behind three games to two. They lost all three of their home games, scoring only one run in each. Washington’s Victor Robles reacts after striking out during the seventh inning of Game 5. Nationals fan Jeff Adams, with two beers in hand, lets a home-run ball hit him in the chest during Game 5. The home run was hit by Houston’s Yordan Alvarez and gave the Astros a 2-0 lead in the second inning. Adams’ sacrifice went viral, and Bud Light gave him tickets to Game 6 in Houston. 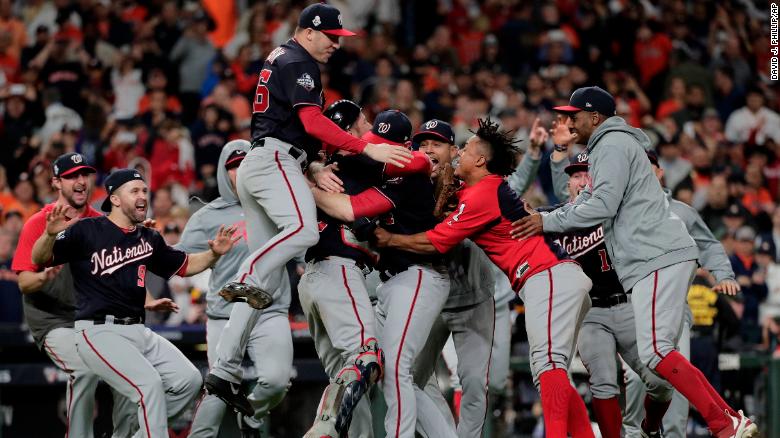 Scherzer, who missed Game 5 with back and neck spasms, said he was fine Wednesday night.
He said his teammates believed in one another. “It just means that I am part of the greatest team in 2019,” he told broadcaster Fox. “These guys, they battled. It was stay in the fight, that was our motto. Everybody gave it their all.” Astros reliever Will Harris, who gave up Kendrick’s go-ahead home run in the seventh inning, took the loss. The Nats broke it open with a run in the eighth and two runs in the ninth. 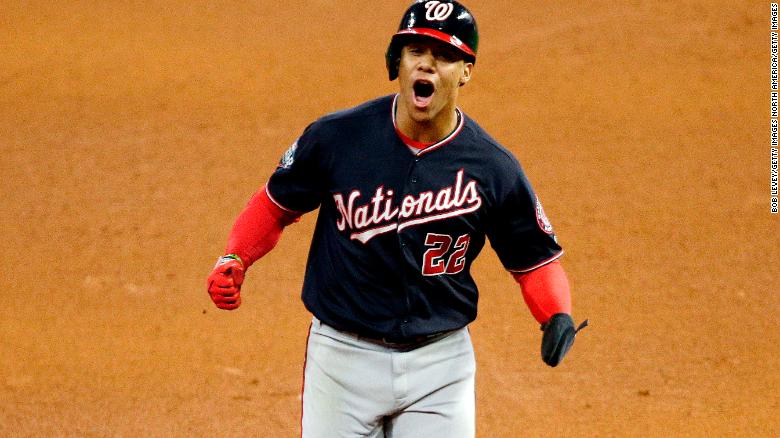 The Astros struck first. Yuli Gurriel hit a leadoff home run in the bottom of the second inning to make it 1-0. In the bottom of the fifth, Houston’s Carlos Correa singled off Rendon’s glove to score Gurriel, who had grounded into a force play and gone to second on a walk to Yordan Alvarez. That made the score 2-0. But the Astros couldn’t score again, leaving 10 men on base.
Astros starter Zack Greinke was tough and efficient, throwing 80 pitches in 6 1/3 innings. He gave up two hits and one run, a home run to Rendon two batters before Kendrick’s blast.
Greinke also had five assists, including one where he started a double play. “He was incredible. He did everything we could’ve asked for and more,” Astros manager A.J. Hinch said. “He was in complete control of the game.” Hinch said the story should be about his opponent. “This isn’t about not performing at home or anything that we didn’t do,” he told reporters. “I come away incredibly impressed by the team that we played and got beat by.” While the title is the first for the Nationals’ franchise, it is the second for the city. In 1924, the Washington Senators, now the Minnesota Twins, defeated the New York Giants four games to three.
Per: CNN

( CNN.com ) New York (CNN Business) Some types of Jergens moisturizer have been recalled because of possible … END_OF_DOCUMENT_TOKEN_TO_BE_REPLACED