The chilling story of Jayme Closs, the 13-year-old Wisconsin girl who was kidnapped after her parents were killed last year, was national news. But people might be less familiar with the story of Arianna Fitts, a 2-year-old who went missing in 2016 before her mother was found brutally murdered in the San Francisco Bay Area. Each of these cases is compelling, but the two didn’t receive the same amount of media attention. Some experts believe it’s because Closs is white and Fitts is black. In fact, data shows that missing white children receive far more media coverage than missing black and brown children, despite higher rates of missing children among communities of color.

The FBI’s National Crime Information Center (NCIC) database lists 424,066 children under 18 that went missing in 2018, the most recent year for which data is available. About 37 percent of those children are black, even though black children only make up about 14 percent of all children in the United States.
It’s harder to say how many Hispanic kids went missing last year. The FBI’s report groups white and Hispanic children together. Based on other reports, about 20 percent of missing children are Hispanic orLatino, according to Robert Lowery, vice president of the missing child division at the National Center for Missing and Exploited Children (NCMEC). But the real number, he said, is likely higher. “I think there’s a false belief that white children make up the biggest number of missing children when in fact (proportionally) it’s just the opposite,” Lowery said, adding that the highnumber of black girls reported missing is particularly concerning. Here are some reasons experts say we don’t hear more about missing children of color:

Their families are hesitant to call police

Some families are hesitant to contact law enforcement, even if they think their child is missing. “There’s a sense of distrust between law enforcement and the minority community,” said Natalie Wilson, co-founder of the Black and Missing Foundation.
That distrust contributes to a “silent code of ‘no snitching,'” Wilson said, adding that it is important for people who suspect a child is missing to speak up. “It could be your child, your mother, your father that’s missing,” she said. “You would want someone to speak up to help find them.” Other families might not report that their child is missing because they fear it could have unintended, negative consequences. For example, Lowery suspects missing Latino children are underreported because some families with undocumented members might not contact police for fear of being deported.

They don’t get as much media coverage

News media organizations have often been criticized for not giving missing black children the amount of attention they give missing white kids. A 2010 study found that black children were significantly underrepresented in TV news. Even though about a third of all missing children in the FBI’s database were black, they only made up about 20 percent of the missing children cases covered in the news. A 2015 study was bleaker: though black children accounted for about 35% of missing children cases in the FBI’s database, they amounted to only 7% of media references. Experts say media coverage is vital to helping solve those cases. “It puts law enforcement on alert, and they add additional resources to the case,” Wilson said. “If no one knows about it, then no one’s doing anything to find them or to help them get the assistance they need.”

Families don’t have the resources

Families don’t always have the financial resources to respond appropriately when their child is missing. They might not be able to afford a private investigator or take off from work to help look for their child and follow up with law enforcement and the media.
And in some cases, they may not know what to do. Wilson said some people are under the misconception that they must wait 48 hours before filing a police report, when that waiting period varies by location. Places like Illinois or Washington, DC, don’t have waiting periods to report a child missing. Knowing the laws in your state helps. And when in doubt, contact law enforcement immediately. There are other resources that families can utilize as well. 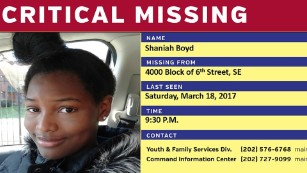 The Black and Missing Foundation helps families of color file police reports, create missing posters and spread the word about missing children. Facebook groups offer an online community for parents to alert the public about their missing child and ask questions of others who have had similar experiences. Eliseo Montoya, who runs the Facebook group Runaway and Missing Children in California, said he keeps the page going because it allows families to feel like they’re doing something even when it seems like authorities are giving up. “A page like mine is very important for people of color because nobody really embraces people of color,” Montoya said.

Some get classified as runaways

When most people think of missing children, they think of young children abducted by strangers. But missing children can refer to kids who are abducted by relatives or children who leave home, either voluntarily or after being lured by someone else.
Many missing children of color are classified as runaways, Wilson said. And while running away from home isn’t a problem unique to nonwhite children, they are particularly vulnerable. A significant number of nonwhite children who go missing are either homeless or in foster care, said Wilson, and many are at risk for sex trafficking. Data shows black children are overrepresented in foster care and are at a much higher risk for homelessness.
Law enforcement often classify children of color as runaways without having all the details, Wilson said. Because those kids are considered to have voluntarily left home, Amber alerts aren’t sent out about them and they typically aren’t covered in the news.
Runaway cases and abductions by family members don’t get the same attention that abductions by non-family members or strangers do. But all these scenarios fall under the “missing” umbrella. A child is missing if they are under the age of 18 and their legal guardian doesn’t know where they are. 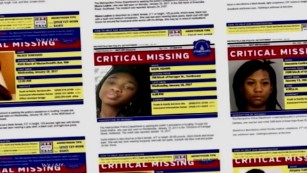 Missing black and Latina children are a crisis for all of us
The NCMEC no longer distinguishes between runaways and abductions on their posters of missing children. “Frankly, we were dealing with a desensitized public and media when we did that,” Lowery said. “Now if you check our website, our children are just listed as missing child.” Wilson stressed that runaway cases should be treated with the same urgency. “We have to be mindful,” she said. “What did they leave from, and what are they ultimately running to?” Sometimes, children of color get classified as runaways when they are truly missing. Wilson said her organization has seen many such cases.
“We tell parents all the time, you know your child better than anyone else, their behavior, their characteristics,” she said. “If you believe your child did not run away, you just have to stand firm with law enforcement and let them know that this is uncharacteristic of your child.”
Per: CNN