President Donald Trump’s business is back in the spotlight. Less than a week after the President reversed course on his plan to host next year’s G-7 at his Trump National Doral Miami in Florida, reports surfaced that his company plans to sell its DC Hotel, which has been the subject of several lawsuits alleging the President is profiting from it in violation of the Constitution. Trump’s defense is that he says he’s put his business “stuff” in a trust and that his family runs it. As of 2018, the President held more than $130 million in foreign assets in this trust, according to an analysis compiled by Open Secrets.

As a trustee, Trump’s eldest son Donald Trump Jr., who is also executive vice president of The Trump Organization, is responsible for looking after the beneficiary (the President) and the business’s bottom line. This arrangement has raised concerns that Trump and his family could use the presidency to profit personally. Since the 2016 election, Trump and his family members have defended the decision, claiming there is nothing improper about their business operations. The recent controversy surrounding former Vice President Joe Biden’s son Hunter and his international business ties has added a new layer to conversations about the ethics around business done by the families of powerful politicians while they’re in office. It’s also spurred the President’s family to attempt to defend their own holdings.

In a recent Fox News interview, Eric, discussing Hunter’s dealings, noted that “the difference between us and Hunter is when my father became commander-in-chief of this country, we got out of all international business, right?” Not quite. Jordan Libowitz, communications director for Citizens for Responsibility and Ethics in Washington, a non-profit government watchdog group, told CNN that Eric’s claim was the “worst lie I’ve heard in a while.”

Facts First: President Trump’s three oldest children have all been involved with international business in some manner since his election. Furthermore, the President has made millions of dollars from foreign assets associated with the Trump Organization in 2017 and 2018, according to his public financial disclosure reports. The Trump Organization also continues to market, promote and expand Trump-branded properties all over the world, as recently as last month.

On October 10, The Trump Organization firm TIGL Ireland Enterprises received approval for a new development that the Irish Times reports will double the size of the Trump International Golf Links and Hotel in Doonbeg, Ireland. Per The Trump Organization’s website, the Trump brand is associated with an estate in Scotland, residential property in India, Indonesia, South Korea, Turkey, the Philippines and Uruguay, and public golf courses in Scotland, Ireland, Dubai, Bali and Indonesia. The golf courses in Ireland and Scotland have accompanying Trump hotels. There’s also a Trump International Hotel & Tower in Vancouver, British Columbia which formally opened in February 2017. As executive vice presidents of The Trump Organization, Trump’s eldest sons have continued to conduct international deals for the family company, despite the President’s initial promise to the contrary. In February 2017, Eric went to the resort island of Cap Cana in the Dominican Republic, where The Trump Organization has had ties since 2007. After the visit, the president and vice president of Cap Cana’s Council said the relationship between the two organizations “remains incredibly strong, especially with Eric, who has led the project since its inception,” adding that “we are excited to be working with the Trump Organization in the future phases of the project.” 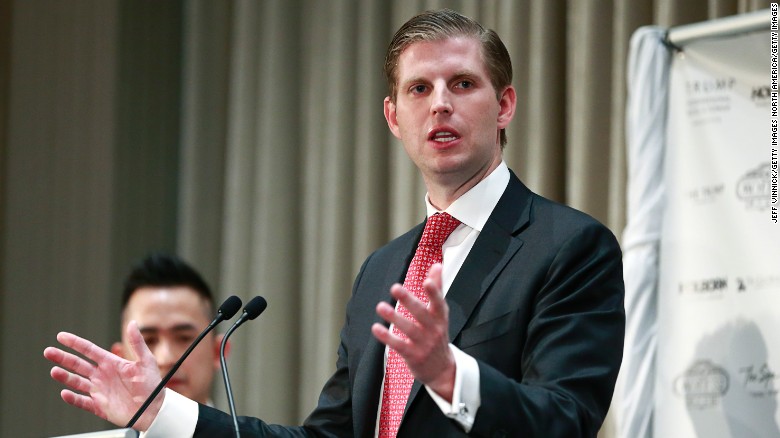 Eric Trump delivers a speech during a ceremony for the official opening of the Trump International Tower and Hotel on February 28, 2017 in Vancouver, Canada. While the Trump International Hotel & Tower in Vancouver was the first property to open with the Trump name after President Trump was sworn in, it was not the last. The month after their father’s inauguration, the Trump sons attended the grand opening of a Trump-branded golf course in Dubai. While The Trump Organization did not itself develop the course, the Trump brand is associated with the property as part of a licensing agreement.
The following year, Trump Jr. visited India to promote Trump-branded apartments for several development projects in Pune, Mumbai, Kolkata and around New Delhi. In June 2018, a few months after Trump Jr.’s visit, construction on the Trump Towers outside New Delhi broke ground. The website for Trump Towers Delhi features a section dedicated to Trump, where Donald Jr. is quoted as saying “we are excited to extend the Trump brand.” All the Trump Towers in India denote on their websites that the properties are not owned, developed or sold by The Trump Organization and that they’re licensing the “Trump” name. These developments represent the same kind of international business that Trump was engaging in before his election. For years, a majority of The Trump Organization’s international business has come from licensing the Trump name. 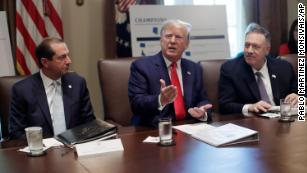 Trump’s Ukraine dishonesty barrage continues. He made 96 false claims last week
This August, Trump Jr. was in Jakarta, Indonesia, to promote Trump Residences Bali and Trump Residences Lido at a private event for potential buyers and tenants. Although The Trump Organization signed a contract for the two properties in 2015, The New York Times reported they were not yet built as of Trump Jr.’s visit. According to the President’s 2016 financial disclosure form, he received between $2-10 million for the two properties.
In Indonesia, Trump Jr. told reporters The Trump Organization was making conscious efforts to avoid any conflicts of interest, saying “we have turned down a lot of deals.” The next month, the organization received approval to expand their Aberdeen golf course in Scotland. 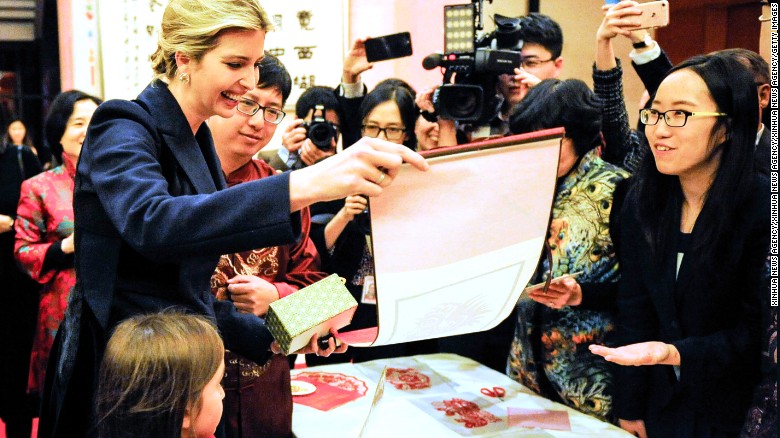 Ivanka Trump attends the Chinese Embassy’s New Year reception in 2017.
Eric’s claim that the Trump children “got out” of international business could potentially apply to Ivanka, who shut down her namesake fashion company in 2018, motivated in part by her awareness that to continue could be seen as a violation of ethics laws and as if she was profiteering off of not only her father’s role as President but also her influence as senior adviser to the president. However, Ivanka’s prior international dealings are the closest to what the President is alleging Hunter Biden did. In April 2017, Ivanka received approval from China for three preliminary trademarks associated with her namesake fashion company the same day she met Chinese President Xi Jinping for dinner with her father, President Trump. Although Ivanka was no longer in a managerial role with the company in 2017, she retained an ownership stake until the following year.
Per: CNN