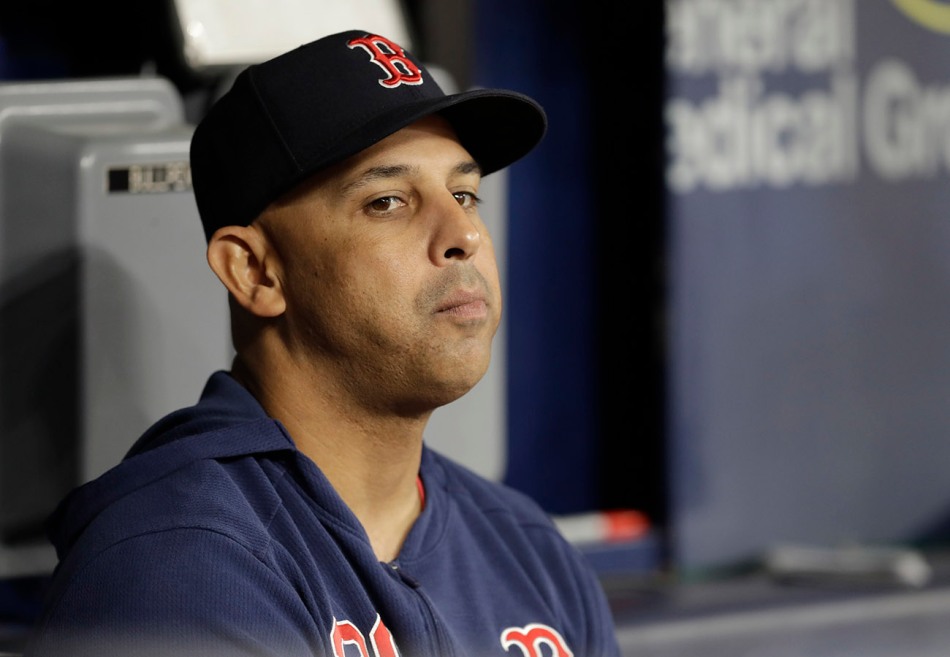 Major League Baseball’s investigation into the Houston Astros cheating operation in 2017 places blame directly on Alex Cora, the former Astros bench coach who now manages the Boston Red Sox.But Cora has not been punished in the investigation. That’s because he is also implicated in a second cheating scandal during his 2018 championship season with the Red Sox, MLB commissioner Rob Manfred says.”I will withhold determining the appropriate level of discipline for Cora until after the (Department of Investigations) completes its investigation of the allegations that the Red Sox engaged in impermissible electronic sign stealing in 2018 while Cora was the manager,” Manfred said Monday.Manfred’s foreboding statement suggests that Cora is likely to face punishment even harsher than that of the Astros leadership.Cora, 44, is regarded as one of the best managers in baseball. As a rookie coach in 2018, the Puerto Rico native led the Red Sox to a World Series championship, and he has used his position to benefit the island in the wake of Hurricane Maria.But that may not help him against MLB’s wrath.

Houston Astros fire the team’s manager and general manager after MLB cheating scheme investigation The MLB investigation makes clear that neither Astros manager A.J. Hinch nor general manager Jeff Luhnow actively participated in the schemes, which were largely led by the players and lower level employees. Still, MLB suspended both without pay for one season. Houston Astros owner and chairman Jim Crane then fired them. They were suspended because “the club’s General Manager and Field Manager are responsible for ensuring that the players both understand the rules and adhere to them,” Manfred said.But unlike Hinch and Luhnow, Cora did actively develop and execute the sign-stealing schemes, Manfred said.”Cora was involved in developing both the banging scheme and utilizing the replay review room to decode and transmit signs,” Manfred said. “Cora participated in both schemes, and through his active participation, implicitly condoned the players’ conduct.”The Red Sox and Cora have not responded to a request for comment.In a statement, Luhnow accepted responsibility for rules violations, but he insisted he was not a “cheater” and placed blame on Cora, then the bench coach.”The sign-stealing initiative was not planned or directed by baseball management; the trash-can banging was driven and executed by players, and the video decoding of signs originated and was executed by lower-level employees working with the bench coach,” he said.

Cora also is being investigated for a separate scheme allegedly developed during his time with the 2018 Red Sox. The Red Sox illegally used a video replay room during regular-season games to decipher the signs of opposing catchers, three unnamed sources who were with the franchise that year told The Athletic.MLB officials said last week they will investigate the matter. Red Sox officials said the accusations were new to them and that they will fully cooperate with MLB. The replay room is where staff members watch the game and can point out plays for the team’s manager to challenge.The system worked like this, according to The Athletic: A staff member in the Red Sox’s video replay room would relay the catcher sign sequence through a player who visited the room, and then a person in the dugout would relay the information to a baserunner who could see the signs as the catcher signaled the pitcher. The runner used a method to tip the batter that he knew what pitch was coming, according to the report. This is not the first time the Boston Red Sox have been investigated for alleged sign stealing. During the 2017 season — prior to Cora’s time with the organization — the Red Sox were fined by MLB for using an Apple Watch to relay stolen signs to hitters in games against the New York Yankees. While the practice of sign stealing is not explicitly banned in baseball, using technology to do so is prohibited.

How the Astros schemes worked

The investigation stems from a report in November in The Athletic, the sports news website, in which former Astros pitcher Mike Fiers — who now pitches for Oakland — said he warned his new teammates that at the Astros’ home games, Houston used an outfield camera fixed on the opposing catcher to steal signs and relay the information to hitters.The MLB investigation found that at the start of the 2017 season, employees in the Astros video replay review room started using the live game feed from the center field camera to decode and transmit opposing teams’ sign sequences to use when an Astros runner was on second base.When the sign sequence was decoded, a player in the video replay room would act as a “runner” to pass along the information to the dugout, according to the findings.

Before the Astros, 7 other cheating scandals that rocked the professional sports worldA person in the dugout would notify players in the dugout or signal the sign sequence to a runner on second base. That runner would decipher the catcher’s sign and signal to the batter from second base, the investigation found.Cora, the then-bench coach, began calling the replay review room on the replay phone to get the sign information, the report said.On occasions, employees in the replay review room communicated the sign sequence with text messages sent to a staff member on the bench with a smart watch — or, in other instances, to a cell phone nearby, the investigation found.This scheme was “originated and executed by lower-level baseball operations employees working in conjunction with Astros players and Cora,” the report says.Several months into the season, Cora arranged for a video room technician to install a monitor displaying the center field camera feed outside the Astros dugout. The center field camera was allowed under MLB rules to be used primarily for player development.According to witnesses, one or more players watched the live feed of the center field camera, and after decoding the sign, a player would “bang a nearby trash can with a bat” to communicate the upcoming type of pitch to the batter, the findings say.Witnesses say the new scheme was “player-driven” — with the exception of Cora.

CNN’s Darran Simon and David Close contributed to this report.