South Carolina is a red state, without question — but that didn’t stop one man from yelling out the rallying cry “Yes we can” at a recent gathering for Jaime Harrison, a Democrat who hopes to challenge longtime Republican Sen. Lindsey Graham in the fall.About 200 people came out last week to Harrison’s campaign event at Emmanuel Baptist Church of James Island in Charleston, where the smell of pluff mud — a thick sludge from the state’s coastal marshes — hung in the air. Many in attendance were staunch Democrats, there to hear Harrison, a Yale-educated former aide to South Carolina Democratic Rep. Jim Clyburn, talk about the dangers posed by President Donald Trump. The party’s Senate primary isn’t until June, but Harrison was focused on energizing voters heading into Saturday’s presidential primary — though he hasn’t endorsed a candidate. Harrison raised nearly $3.6 million during the last three months of 2019, outraising most other Democratic Senate challengers with the exception of Arizona’s Mark Kelly, the astronaut husband of former Rep. Gabrielle Giffords, and Amy McGrath, who is running a long-shot campaign to unseat Senate Majority Leader Mitch McConnell in Kentucky.Graham raised even more that Harrison last quarter: almost $4 million. It was a record for a single quarter of fundraising in South Carolina, and Graham is now sitting on more than $10 million, far more than Harrison’s $4.7 million.That’s put their race on track to be the most expensive Senate campaign in South Carolina history, even though almost no one who watches South Carolina politics closely — except maybe Harrison — thinks it’s possible that Graham will be unseated.South Carolina is a Republican stronghold, voting for the Republican candidate in 13 of the last 14 presidential elections. Trump won South Carolina by 14 points, and carried the independent vote. In 2014, Graham beat his most recent Democratic challenger by nearly 16 points. An NBC/Marist poll released earlier in the month put Graham ahead by 17 points. Harrison’s hopes of narrowing that gap ride on whoever comes out the victor in the Democratic presidential race. Former Vice President Joe Biden was leading in the most recent poll, released by Monmouth University earlier in the week, while Vermont Sen. Bernie Sanders, the democratic socialist who’s emerged as the front-runner for the nomination, was polling second in South Carolina.”If Bernie Sanders is on the ticket then it’s the same as if General Grant was invading the Palmetto State,” said David Woodard, a retired political science professor at Clemson University who managed Graham’s first congressional race in 1994.

From the ‘corridor of shame’ to Yale

Harrison, 44, was born to a single 16-year-old mother and grew up poor in Orangeburg, halfway between Charleston and Columbia, along the interstate in an area once dubbed the “corridor of shame” by a 2006 documentary about failing public schools. But he went on to Yale and then Georgetown Law School before going to work for Clyburn, the most powerful Democrat in the state — who has endorsed Biden in Saturday’s presidential primary. (Clyburn also warned Friday on CNN that Democrats are concerned about “down-ballot carnage” if Democrats go with a non-moderate candidate.) After working for Clyburn, Harrison served as the first black chair of the South Carolina Democratic party from 2013 to 2017 and is currently associate chair and counsel of the Democratic National Committee. 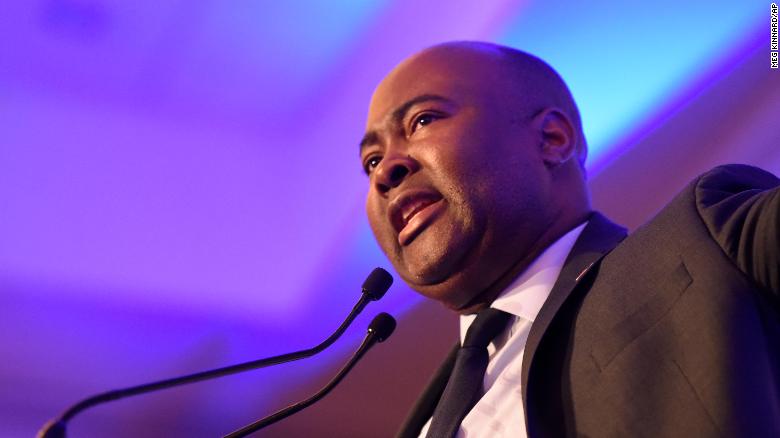 Jaime Harrison, a Democrat, hopes to challenge longtime Republican Sen. Lindsey Graham in the fall. He often zeroes in on Graham’s strong support of Brett Kavanaugh’s Supreme Court appointment in 2018 — a moment that has galvanized other Democratic Senate challenges across the country — as a watershed moment that prompted him to seek office.”I can tell you as a black person in South Carolina whose grandparents grew up through Jim Crow, when you lose the courts and justice no longer becomes just, we’re in a world of trouble. And we are on the verge of that,” Harrison said at the campaign event in Charleston. “And that’s why this election is the most consequential election of our life.”A close friend, Clay Middleton, says that he and Harrison have been talking about running for political office since they met in 2001 when they were both working in Washington.”In late night conversations, I remember him saying, ‘Clay, if we ever run for public office, here’s how we would run the campaign and here’s the ideas we would implement,'” Middleton said.”I’m seeing everything we have talked about come into play,” he added.

Democrats have scored some wins

There are some places where Democrats have broken through. In 2018, Democrat Joe Cunningham flipped South Carolina’s first district, which includes Charleston. It’s a higher educated, higher-income area that Trump carried in 2016. But Cunningham faced off against an outside Republican challenger who defeated incumbent Mark Sanford, the state’s former governor, in the GOP primary.Newcomers to the state, moving in from blue areas like New England, have sparked hopes of expanding that Democratic support in the booming Charleston area, and Harrison is working to register black voters, who turned out in record numbers to vote for Obama in 2008.”This should be Graham’s most competitive election since his first contest in 2002,” said Gibbs Knotts, a political science professor at the College of Charleston. “But it’s like they’re running a 100-meter dash and Graham is already at the 20-meter mark.”In his speeches and on Twitter, Harrison insists that his campaign isn’t about beating Trump, or Graham, or pitting Republicans against Democrats.He often tells a story about how his mom, at the age of 18, wrote to her senators asking for help getting a job. The late Republican Sen. Strom Thurmond, who had run for President as a segregationist but also was later revealed to have a secret biracial daughter, helped her get an interview and land a new job, Harrison says.”And I remember asking my mom, ‘Are you sure that was Strom?’ She laughed, too, and she said, ‘You know what Jaime, they didn’t ask me what color I was, or what political party I belonged to, all they knew was that I was a constituent that needed help,'” Harrison recalled at his campaign event.

Harrison, who lives in Columbia with his wife Marie and their two young sons, believes things have changed for the state’s struggling families.”These families get up each and every day and believe that there is no hope. They don’t believe that their kids will be better off than them,” he said.Harrison talks a lot about crumbling roads, a lack of high-speed internet access, and that four rural hospitals closed in South Carolina since 2012. He’s integrating community service with his campaign, with an initiative he calls “Harrison Helps.” Last year it organized a school supplies drive.South Carolina Republican Party Chairman Drew McKissick dismissed the challenge posed by Harrison’s campaign.”If he’s planning on running for US Senate on a county council agenda, he’s not going to get very far on election day,” McKissick said, adding, “I think we’re going to see what we normally see. Republicans doing really, really well on election day and Democrats not so good.”Graham’s campaign spokesman declined to comment.Alex Sanders, a Democrat who ran unsuccessfully against Graham in his first bid for the Senate in 2002 to replace Thurmond, said that he thought Harrison was “a spectacularly good candidate” — but said the demographics of the state are an implacable challenge.”He’s running in the reddest of states,” said Sanders, the former president of the College of Charleston. “Maybe it should have a color of its own, because red isn’t enough.”