Strong storms and at least one tornado tore through Nashville and a swath of Middle Tennessee late Monday and early Tuesday, killing at least eight people — including two in the state capital — and leaving a number of homes and other buildings in ruins. 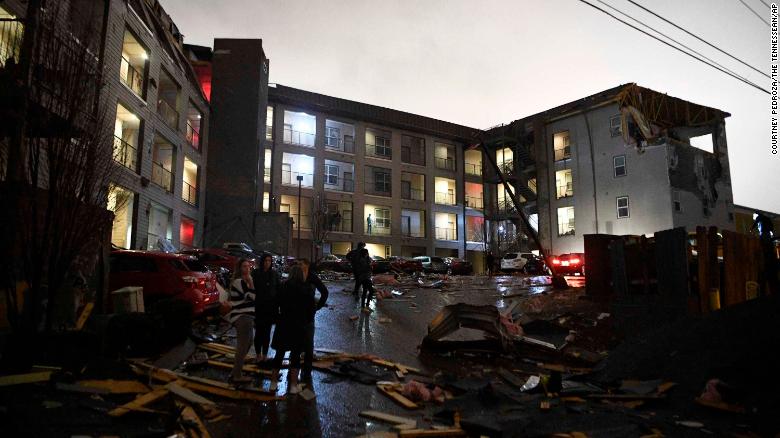 At least 40 structure collapses were reported in Nashville. Tens of thousands were without power in the region Tuesday morning, as officials scrambled to understand the full extent of the damage. Here is where deaths have been reported so far:• Two in East Nashville, near downtown, police said. Four in Putnam County, roughly 80 miles east of Nashville, according to the Tennessee Emergency Management Agency.• Four elsewhere across the region, according to TEMA.

Tornadoes were reported at least three times along a 145-mile stretch, from the small city of Camden just after 11 p.m. CT, through Nashville after midnight, and into the Cookeville area in Putnam County shortly before 2 a.m., the National Weather Service said. About 20 people are in Nashville-area hospitals because of tornado or storm damage in the city,Mayor John Cooper told CNN affiliate WTVF.”There are a couple of tragic cases, in one case a tree falling on a car and there are also I believe about 20 people in the hospital, so we need to monitor that very carefully,” Cooper said.

“We all worry about some people being left in some buildings that have been damaged and I know the first responders are working their way through that problem.”The Nashville Fire Department is responding to approximately 40 collapsed structures around the city, according toa tweet from the agency. Officers who specialize in urban search and rescue are being called in, Nashville police said. Rescuers are focusing their efforts in Germantown, East Nashville and Hermitage, according to Joseph Pleasant, spokesman with the Nashville Office of Emergency Management. 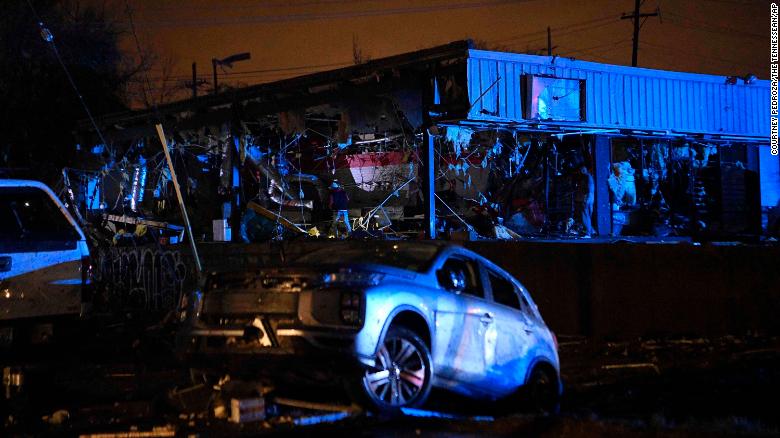 Damaged vehicles and buildings in East Nashville after a tornado hit the city in the early Tuesday.

Strong to severe storms still are possible across parts of the South on Tuesday, including Texas, North Alabama, Georgia, North Carolina and Virginia. In central and eastern Alabama, a tornado watch was scheduled to be in effect until 11 a.m. CT.Among the hardest-hit areas in Tennessee was Mt. Juliet, a suburb about 20 miles east of Nashville. The storm tore apart several homes and other buildings, obliterated their roofs and scattering debris across yards, aerial video from CNN affiliate WSMV showed. An unspecified number of people were injured there, and police are searching for others who might be hurt, Mt. Juliet police said. 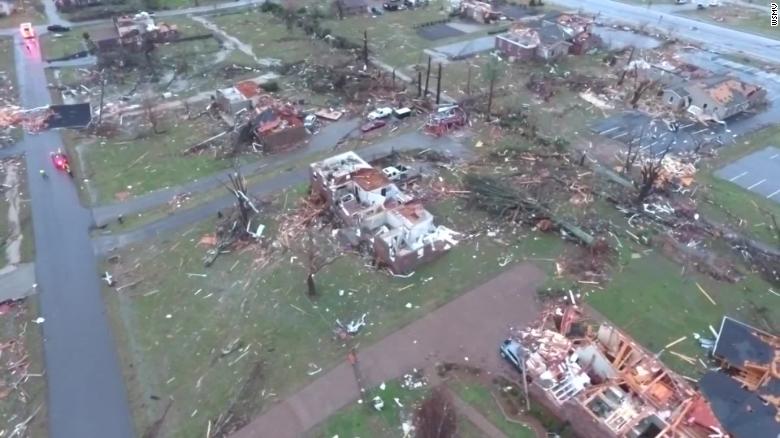 Aerial footage shows home damage in the Nashville suburb of Mt. Juliet. Schools in Wilson County, where Mt. Juliet is located, will be closed for the rest of the week because of storm damage, the county sheriff’s office said. Parts of a school there, West Wilson Middle School, were flattened, video from WSMV showed.Further to the east, in Putnam County, there are “several critically injured” people, county Mayor Randy Porter told CNN in a Facebook message. The county suffered damage to several homes and power lines, he said. In a Facebook post, the Putnam County Sheriff’s Department confirmed a tornado touched down between the city limits of Cookeville and Baxter. The Putnam County Sheriff Department says some of the worst hit areas are in Charleton Square, Plunk Whitson, Echo Valley and Prosperity Point.Several injuries have been reported in the city of Cookeville, Mayor Ricky Shelton said. The Cookeville Community Center has been opened as an emergency shelter, Porter said in a Facebook post. The Nashville Emergency Operations Center has partially activated to respond to the damage from the storm, according to a tweet from the center. The center later tweeted that all non-essential Nashville government offices will be closed along with Nashville schools. An emergency shelter has been opened at the Centennial Sportsplex on 25th Avenue North and the Red Cross is responding to help displaced residents, the EOC said. A previous shelter at the Farmer’s Market was closed after it lost power, the EOC said. 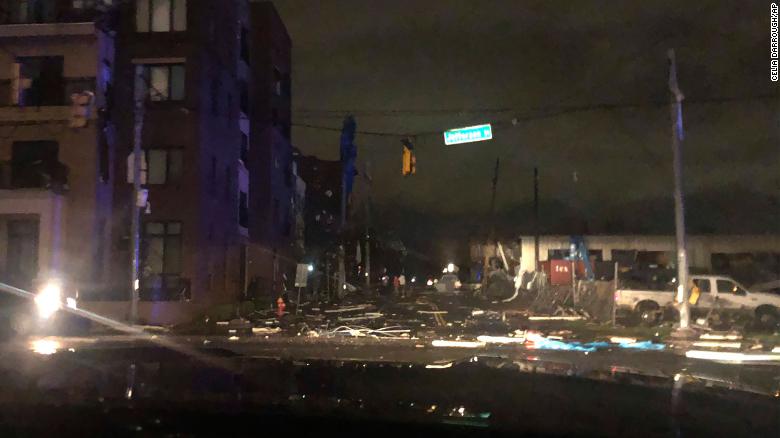 Debris littered the streets of Nashville following the tornado.

Voting delayed one hour in Davidson and Wilson counties

The storms came as Tennessee prepared to join other states for Super Tuesday presidential primary voting. In Davidson County, where Nashville is, and Wilson County, voting will be delayed one hour because of the storms, officials said. At least 50,100power outages were reported statewide early Tuesday, according to poweroutage.us, with more than47,000 reported by Nashville Electric Service. Metro Nashville Public Schools are closed due to tornado damage throughout the city, a notice from the district said. Election polling sites at school facilities will be open unless otherwise noted, according to the notice.John C. Tune Airport in West Nashville also “sustained significant damage,” according to a tweet from Nashville International Airport, which did not suffer any apparent damage.
The Airport Authority has activated the Emergency Operations Center, and the public has been advised to stay away from the airport until further notice, the tweet said.

1/ FYI: John C. Tune Airport (JWN), BNA’s sister airport in West Nashville, sustained significant damage due to severe weather earlier this morning. There were no reported injuries. Several hangars have been destroyed, and power lines are down. (Continued…) At least two blocks of multi-story buildings are shown with their windows blown out in the Germantown area of downtown Nashville, images from WTVF show. Scraps of wood and metal lined the street as people stood outside in their pajamas with their pets surveying the damage. 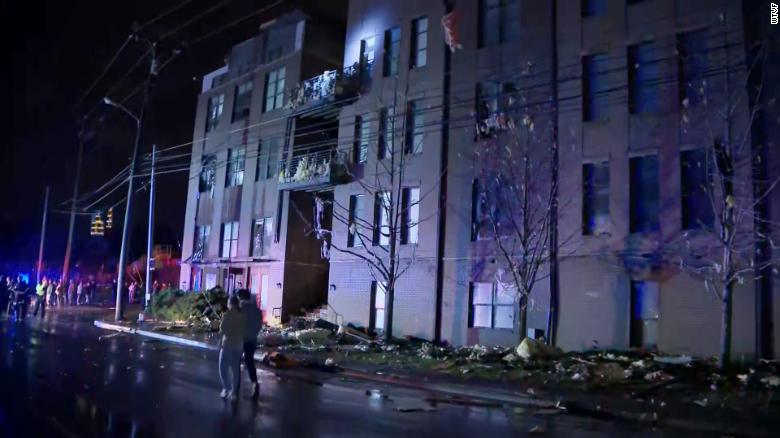 Windows were blown out of a building following a tornado in Nashville. A resident of the area impacted by the tornado, who didn’t give her name, told WTVF she was woken up by the tornado as it tore the roof off part of her building.”It just woke you out of your sleep,” she said. “I’m lucky my side didn’t get torn off. The other side is totally torn off.” “When you’re inside it’s one thing, but to walk outside and see this it’s bad,” the woman told the affiliate.

Confirmed tornado northwest of Downtown Nashville. TAKE COVER NOW IF YOU ARE IN DAVIDSON, WILSON, OR SUMNER COUNTIES!The storm has since cleared the Nashville area and the tornado warning has expired, but tornado warnings were issued by the National Weather Service throughout Tennessee until 6 a.m. CST Tuesday. Heavy rains will continue in Nashville this morning with the potential for flooding as another strong line of storms moves through the metro area. Investigators with the National Weather Service will survey the damage and confirm the tornado’s intensity later today.