Tennessee is under a state of emergency Wednesday after the deadliest tornado day in seven years. Survey teams reported damage caused by an EF-3 tornado in East Nashville, Donelson and in Mt. Juliet, about 20 miles east of Nashville, though it’s unclear how many tornadoes touched down, said the National Weather Service, which is still surveying the damage. Before dawn Tuesday, 24 people were killed, and hundreds of buildings were destroyed by the storms. Officials in Putnam County, which suffered 18 storm-related deaths, said they are working to locate 22 people who are unaccounted for, down from 38 earlier in the morning. Donelson was hit especially hard, with surveyors estimating the widespread damage was caused by tornado winds of up to 165 mph. Meg Selby and Mac Warren were in their Donelson home sleeping when the storm alarms on their phones awoke them early Tuesday. They heard tornado sirens outside, so they corralled their dogs and headed to their storm cellar.

The couple, who are engaged to be married March 28 and just bought their home in September, thought the storm would pass, but the local meteorologist warned the twister was headed their way.”Listening to her talk about the path … the tornado was on, it went from being kind of a precautionary thing to living through something very catastrophic,” Selby told CNN. Added Warren, “It got quiet, and you could hear this sort of slow roar, and it just got gradually louder and louder.”The house started shaking, he said. The temperature dropped. The pressure intensified and his ears popped, he said.”It was terrifying,” he said. They emerged from the cellar to find their home — a fixer-upper they said had brought them closer together as they worked on repairs together — destroyed. Most of its roof had been ripped off. Windows were blown out. Their garage doors were warped, and their belongings had been tossed everywhere, both inside and outside the home. 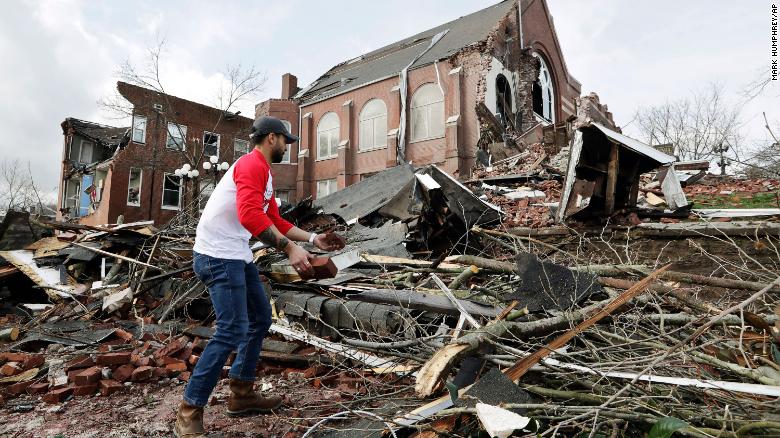 Sumant Joshi helps to clean up rubble at a Nashville church Tuesday.”It kind of just feels like it’s all been taken from you, and we’ll get back on our feet, but we’ll always talk about this time of our lives, of getting to just invent something together,” Selby said. “To not really have anything to show for it now is hard, and I, retrospectively, wish I had more pictures.”Their wedding venue seems OK, Warren said, so the nuptials will go on as planned, but the couple say they are canceling their honeymoon to Hawaii to focus on making sure they have somewhere to live.

Where the damage stands

With a big focus on Nashville, today is revealing just how bad rural Putnam County was hit. 18 of the 24 killed across the state died here. Devastation everywhere. There was a home where that slab of concrete is. #TennesseeTornadoes

Of the 18 deaths in his county, five were children younger than 13, Porter said. Another 88 people were injured, the mayor said. Only one of the deceased — a woman found outside an apartment complex — remains unidentified, he said. Besides Putnam, there were three deaths in Wilson County, two in Davidson County and one in Benton County, the Tennessee Emergency Management Agency reported. Tornadoes in the Southeast are getting worse The weather service has yet to survey the damage in Putnam County, saying crews will begin once it is safe to do so. In East Nashville, residents had only a six-minute warning to get to safety, according to Davidson County. “I got the warning, and in less than 10 minutes you could just feel the pressure, my ears were popping we all ran downstairs and just huddled together,” Danielle Theophile told CNN affiliate WSMV. “It went by so fast.”Tuesday was the deadliest tornado day since May 6, 2013, when a tornado struck Moore, Oklahoma, according to the weather service. It wasn’t immediately clear how many tornadoes struck the region, but tornadoes were reported several times along a 145-mile stretch of Middle Tennessee — from Camden, about 80 miles west of Nashville, to the Cookeville area, about 80 miles east of Music City, the weather service said. About 40,000 customers were without power early Wednesday, most of them in Davidson and Wilson counties, TEMA said. Crews were having trouble getting to the affected areas because of downed power lines.

Metro Nashville Public Schools and allextracurricularprograms are canceled Wednesday because of the damage and outages, the district said.”We know that families are facing challenges due to their children suddenly being out of school,” said Adrienne Battle, the school district’s interim director. “We’re sensitive to those issues and eager to get students back in classrooms as soon as possible, but the extent of the tornado’s impact requires us to take at least one more day.”One school will require a few days of repairs; another, up to several weeks, the district said.

The storms fell on Super Tuesday, and many of the polling locations were in the storm’s path.Some locations were destroyed or damaged, and in some instances, multiple polling places were consolidated into one.”We’ve deployed generators to polling stations that don’t have power,” said Gov. Bill Lee. “We want folks to get out there and exercise their right to vote.” 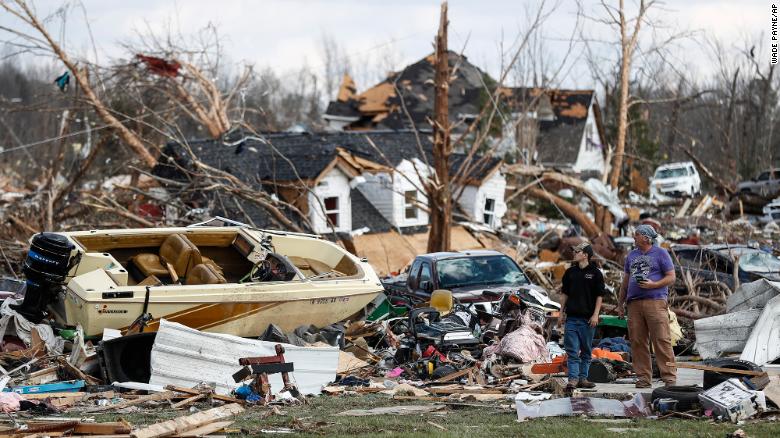 Two men survey the damage Tuesday after a tornado touched down in Cookeville, Tennessee. The four top campaigns — Joe Biden, Mike Bloomberg, Bernie Sanders and Elizabeth Warren — filed a lawsuit along with the Democratic Party to extend voting after the storm delayed the opening of polls. A judge approved five so-called “mega-sites,” extending voting until 10 p.m. CT (11 p.m. ET), while other voting locations in the precinct remained open until 8 p.m. President Donald Trump will visit Nashville to tour the damage Friday, and the federal government will be assisting in recovery efforts, the White House said.

Those suffering from the damage aren’t doing so alone; strangers and neighbors have come together to help each other out. “We’re called the Volunteer State, and there’s a reason for that — because Tennesseans have a real spirit of generosity and service to one another,” Lee told reporters. “As governor, now I get to see it happen for real. “Theophile said both her home and her neighbor’s home lost their roofs, and her neighbors, an elderly couple, had their roof collapse on them, she said. She worked to dig them out. 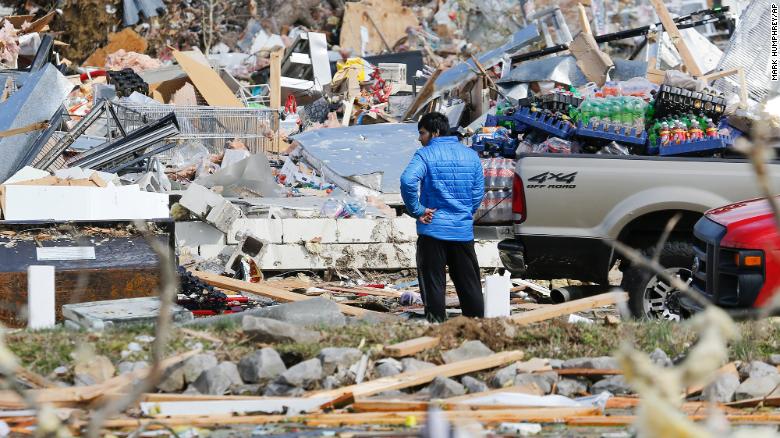 A man searches for items he can salvage from his store Tuesday near Cookeville. Michelle Whitten was sleeping when a friend called her to say that she and her three children were in the tornado’s path. She grabbed her children and rushed to a closet, she said. “As soon as we did that, we hear the wind howling as it’s over the house and hear something like a train over us. The house started to shake, and windows shattered. We could hear … loud boom sounds,” she told CNN. “I’ve never been so scared in my life! “In East Nashville, a neighbor came to help board up a large window at a Crye-Leike Realtors office that was blown out. “That’s just how East Nashville is. That’s one of the reasons we like selling over here and living over here,” said a broker with the office.