A tornado ripped through Jonesboro, Arkansas, injuring 22 people and leaving a trail of flattened homes and buildings. Mayor Harold Perrin and other local officials said there were no deaths after the tornado touched down on Saturday in the city, about 130 miles northeast of Little Rock. Of the 22 injured people, two stayed in the hospital overnight but did not have life-threatening injuries, officials said. 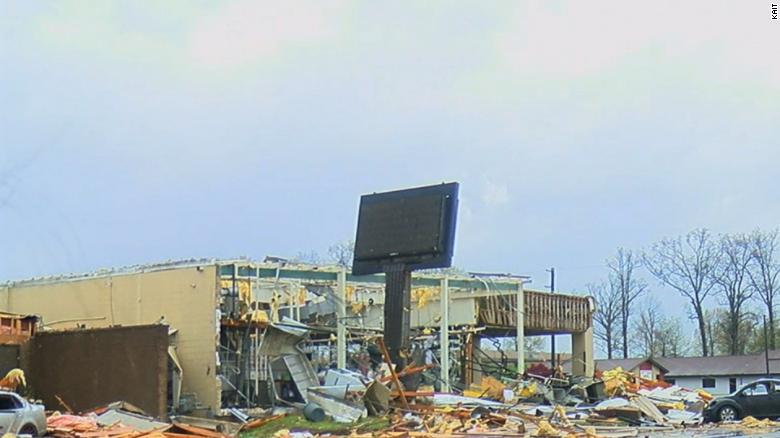 Storm damage in Jonesboro, Arkansas, on Saturday.Images posted on social media, including from the Jonesboro Police Department,showed broken walls, flattened commercial buildings and debris scattered across parking lots. One picture showed a mangled vehicle in the mall parking lot. At the local airport, at least one airplane was overturned, and hangars were damaged. 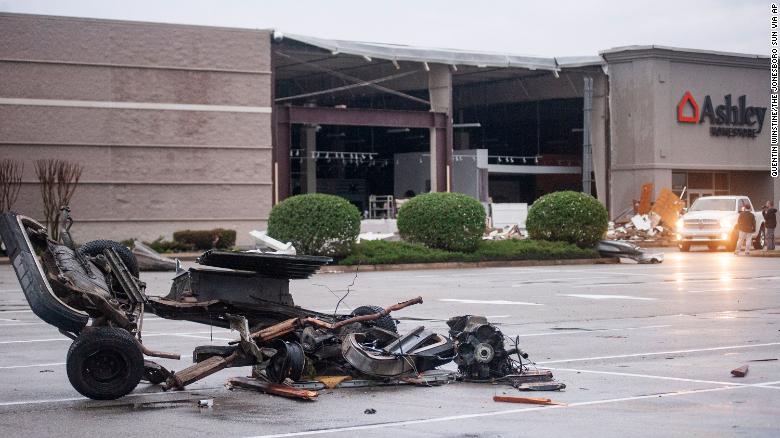 The damaged remains of a vehicle lie in a parking lot outside a damaged Ashley HomeStore after the tornado Saturday in Jonesboro. The search and rescue efforts were completed by Sunday morning, and responders are moving into the cleanup and recovery phases, Craighead County Judge Marvin Day said. The storm moved across Jonesboro around 5 p.m. local time, according to a video posted by the National Weather Service in Little Rock. Day said there is a curfew from 9 p.m. to 6 a.m., and Jonesboro Police Chief Rick Elliott urged residents to stay home while debris is cleared out of roadways and other common areas.”We’ve already asked you to stay at home for this virus but we’re really stressing to stay at home,” Elliott said.Jurnee Taylor✔@_JurneeTaylor

Just arrived on Caraway. A lot of damage. Working on injuries @Region8News

Other tornadoes in Iowa

Other tornadoes struck Saturday, according to the weather service. A map on its website showed tornado strikes in Arkansas and Iowa, though none appeared to have been as damaging as the one in Jonesboro. Tornado sightings were reported in Iowa in Black Hawk, Buchanan, Marshall Adams and Adair counties. The weather service map said power lines were knocked down and roofs blown off in Jackson County, Arkansas.The weather service issued a rare “Particularly Dangerous Situation” tornado watch for parts of the Midwest through Saturday night. The states most at risk were Iowa, Missouri and Illinois.