The Georgia Bureau of Investigation searched the home of two men charged in the death of Ahmaud Arbery, the agency said.

The search warrant was executed Tuesday at Greg and Travis McMichaels’ home in Satilla Shores, the Glynn County neighborhood where Travis McMichael killed Arbery with a shotgun February 23.

The search was part of the investigation into Arbery’s killing, the GBI said, but no further details were provided because the case remains active. 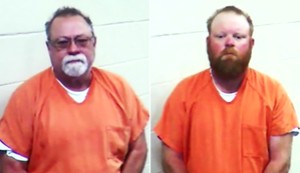 Greg McMichael — a former prosecutorial investigator, ex-Glynn County police officer and Travis’ father — told police that he and his son chased Arbery after seeing him at a neighbor’s under-construction home. They suspected him in a rash of break-ins, according to an incident report.

There had been only one reported break-in — wherein Travis McMichael reported a gun stolen from an unlocked truck — during the more than seven weeks prior to Arbery’s killing, police said. The owner of the home in progress did not report any crime after his surveillance cameras caught Arbery on the property, he told CNN.

The McMichaels grabbed their guns and chased Arbery in their truck, but Arbery twice dodged them before the deadly confrontation between Arbery and Travis McMichael, the father told police, according to the report.

The McMichaels’ neighbor, William Bryan, recorded the incident from his vehicle. It shows Arbery trying to run around the McMichaels’ truck before turning sharply toward Travis McMichael and tussling over his gun. Arbery was shot three times and collapsed in the street.

The 36-second video was not released until more than 10 weeks after the killing and spurred calls for the McMichaels’ arrests. They were charged with aggravated assault and murder earlier this month.

The father and son’s legal teams have said the full details of the case haven’t made it into the public arena, and they’ve promised the truth will exonerate their clients.

Arbery family attorney S. Lee Merritt has demanded Bryan be arrested because he took part in “the ambush of Ahmaud Arbery,” but Bryan’s attorney, Kevin Gough, said his client was unarmed, did not speak to the McMichaels that day and was not involved in the killing. Gough has provided the GBI with results from a polygraph indicating as much, he said.

It was Greg McMichael who implicated Bryan as a participant in Arbery’s pursuit, saying at one point Bryan helped try to block Arbery’s path, according to the police incident report. The GBI declined to comment, citing the ongoing investigation.

Bryan is currently in hiding, Gough said.”Mr. Bryan is not your enemy,” Gough said, directing his comments to the Arbery family. “Killing off the star witness for the prosecution will not help bring Ahmaud’s killers to justice.”