Bryan told police McMichael said “f***ing n***er” after three blasts from McMichael’s shotgun left Arbery dead in February the streets of the Satilla Shores neighborhood, Assistant Special Agent in Charge Richard Dial said.Body camera footage also showed a Confederate flag sticker on the toolbox of McMichael’s truck, Dial said.The allegations came as Dial outlined the events that led to Arbery’s death and told the court that before Arbery was shot, the three men charged in his murder engaged in an elaborate chase, hitting the 25-year-old jogger with a truck as he repeatedly tried to avoid them.

As Travis and Gregory McMichael attempted to head him off, Arbery turned and ran past the truck of Bryan, who filmed the killing, and Bryan struck Arbery with the side of his truck, Dial said.

The new details of the final moments of Arbery’s life emerged amid a week of nationwide protests over another killing — that of George Floyd by police in Minneapolis — and demonstrators have also called for justice in Arbery’s case.

Investigators found a swipe from a palm print on the rear doorof Bryan’s truck, cotton fibers near the truck bed that “we attribute to contact with Mr. Arbery” and a dent below the fibers, he said.

Though Bryan’s attorney has contested allegations his client took part in the killing, Dial said Bryan first became involved by yelling to the McMichaels, “Do you got him?” when he saw them chasing the 25-year-old jogger. The McMichaels and Bryan have not entered pleas, but lawyers for all three men have proclaimed their innocence.

After yelling out to the McMichaels about Arbery, Bryan joined the chase, and at this point, none of the three had called 911, Dial said.

The McMichaels had already tried to head off Arbery once when Bryan joined the pursuit, the GBI agent said. Bryan tried to block in Arbery as Travis McMichael drove around the block with his father in the bed of the truck.

Bryan “made several statements about trying to block him in and using his vehicle to try to stop him,” Dial said. “His statement was that Mr. Arbery kept jumping out of the way and moving around the bumper and actually running down into the ditch in an attempt to avoid his truck.”

At one point, Arbery was heading out of the Satilla Shores neighborhood where the defendants live, but the McMichaels forced him to turn back into the neighborhood and run past Bryan, the agent said. That is when he struck Arbery, Dial said, and Arbery kept running with the McMichaels in pursuit.

Bryan turned around, and that is where the widely disseminated video of Arbery’s killing begins, he said.

Lawyers for the McMichaels opened the proceeding by requesting their clients be physically present in the courtroom, which Glynn County Chief Magistrate Judge Wallace Harrell denied.

The McMichaels, charged with murder and aggravated assault, appeared wearing face masks from the Glynn County Detention Center a few miles away from the courthouse.Bryan waived his right to appear. He was arrested last month on charges that include felony murder. 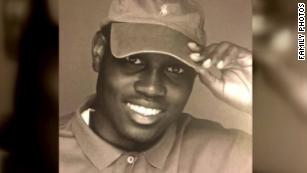 Also in the courtroom will be Arbery’s mother, Wanda Cooper, family attorney S. Lee Merritt said. She is not expected to make a statement. Cooper has said her son was out for a jog when he was killed.

Gov. Brian Kemp has promised a substantial police presence and issued a warning to any “bad actors” seeking to disrupt the proceedings and heretofore peaceful protests in the county.

Though they’re only preliminary hearings, the defense and prosecution are expected to provide a peek into their strategies. Harrell will decide after the hearing if the cases will be sent to superior court for trial.

The GBI took over the investigation after Glynn County police and two prosecutors declined to press charges. Atlantic Judicial Circuit District Attorney Tom Durden became the third prosecutor to recuse himself after the GBI assistance he requested promptly yielded charges.

Bryan’s attorney has repeatedly insisted that his client was merely an observer and has questioned why state police charged the man he labels the prosecution’s “star witness.”Travis McMichael, who is accused of the actual February 23 shooting outside of Brunswick, is not guilty, his attorneys say, as “compelling evidence” will demonstrate.

“Travis has been vilified before his voice could even be heard,” the lawyers said in a statement. “The truth in this case will exonerate Travis.”

Seating is limited due coronavirus concerns, and an overflow room was set up to handle those wishing to watch the proceedings.

Demonstrations are expected. The NAACP has organized a protest for 5:45 p.m. outside the courthouse.

Gregory and Travis McMichael were arrested May 7 in the shooting death in the Satilla Shores neighborhood. The father and son pursued Arbery after suspecting him in a rash of area break-ins, the elder McMichael told police, according to an incident report.

The McMichaels armed themselves and, with Bryan’s help, tried to head off Arbery as he ran through their neighborhood, but on their first two attempts, the 25-year-old doubled back and ran in the other direction, Gregory McMichael told police, according to the report.

Bryan’s video picks up before the third attempt, and Arbery is seen trying to avoid the McMichaels’ pickup truck, which is stopped in the road, before abruptly turning toward Travis McMichael in front of the truck.