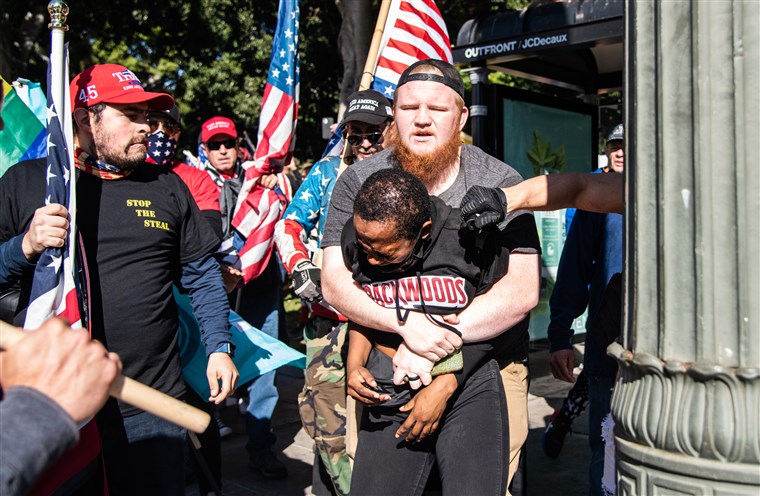 The Los Angeles Police Department said it is investigating Wednesday’s attack as a hate crime.

A Black woman in California said a group of nearly 40 pro-Trump demonstrators attacked her and called her the n-word following a rally in downtown Los Angeles.

Police said they are investigating the incident as a hate crime after speaking with the woman.

“The woman has been identified & interviewed by the LAPD. Based on her statements & other evidence, a hate crime/battery report was taken,” the Los Angeles Police Department said in a statement on Twitter.

The woman, Berlinda, 25, said she was walking when she saw the large group on Wednesday, according to NBC Los Angeles, which noted that she asked that her last name not be used. Earlier in the day, a protest was held, with many demonstrators carrying “Stop the Steal” signs.

Berlinda said that several people in the group told her to take her face mask off. She told NBC Los Angeles that the crowd started following her after she flipped them off.

“A bunch of women and men started yelling, ‘take off your mask, don’t wear a mask,'” she said, telling the outlet that she asked one man in the group to leave her alone. “And that’s when the guy went and took his hand, clawed me in the face. And then just smacked my phone in my face.”

Berlinda said others shoved her and she was called a racial slur.

The assault was captured by photographer Raquel Natalicchio, 29. She told NBC News in an interview Friday that she saw Berlinda walking by herself and heard the protesters heckling her and asking if she voted for President Donald Trump. It is unclear whether all those shown in Natalicchio’s photos were involved in the alleged assault.

Berlinda told them no and flipped them off as she kept walking, Natalicchio said.

“They kept kind of heckling her for that, and she told them to put on a mask,” Natalicchio said, noting that many people who attended the rally did not have a face mask on. “As soon as she told them to put a mask on, they swarmed her and circled her and started pushing her around amongst them, and trying to intimidate her.”

Natalicchio said one woman snatched Berlinda’s hair extensions out “and began assaulting her.” Berlinda tried to defend herself and several men started hitting her with metal flag poles, according to Natalicchio. The woman was also believed to be pepper-sprayed in the eyes.

One man came forward to help. He was captured in an image grabbing Berlinda from behind to pull her to safety.

“That guy, I call him my hero,” Berlinda told NBC Los Angeles. “That guy picked me up, was whispering in my ear, telling me, ‘Keep going. You’re OK. I got you, I have your phone. You’re OK, I’m going to get you out of here. These people are trying to kill you.'”

Berlinda declined to be interviewed when contacted by NBC News on Friday, citing safety concerns.

The LAPD said it is conducting an investigation into the incident and asked that anyone who witnessed what happened or may have information to come forward.

Five people died during the chaos, including a woman fatally shot by police and a Capitol police officer who died from injuries he sustained.

RunnersWorld.com In the women’s 100-meter final, Sha’Carri Richardson, Javianne Oliver, and Teahna Daniels made the END_OF_DOCUMENT_TOKEN_TO_BE_REPLACED