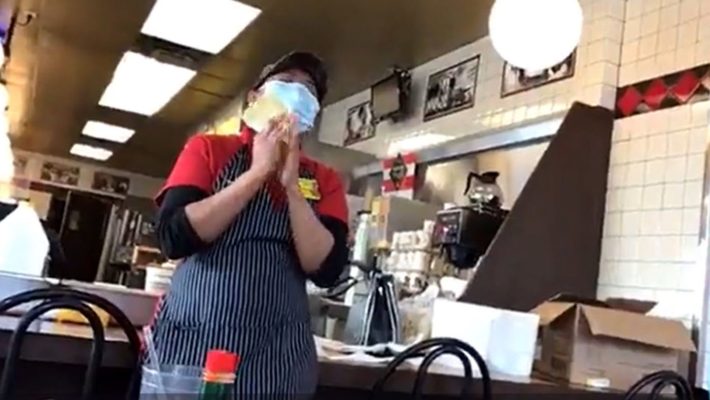 A Georgia man had to stuff down 18 waffles last Sunday after losing a fantasy football bet. He streamed the act live on Facebook from the Waffle House where he chose to take on the waffles and also raised a tip worth more than $1,000 for his server.

Michael Carsley, 32, captured the waitress’ stunned reaction in a heartwarming moment at the end of the livestream.

“Really!? Are you for real?” said Mosammat Shumi, the server who shuffled him the buttery dishes. Then she buried her head in her hands.

Carsley’s punishment for finishing last in his fantasy football league was a trip to Waffle House, and each waffle he ate shortened the visit by 30 minutes from a starting minimum of 24 hours.

The roofing services salesman said he felt awful after the first seven waffles, and he had to slow down and revise his eating goals.

But Carsley, of the Atlanta suburb of Chamblee, ultimately managed to scarf down 18 waffles in five hours, logging a $50 bill that met a massive gratuity.

“Once in a lifetime,” Shumi told CNN, describing the tip. “There is so much happiness.”

Carsley said his fantasy football woes stemmed from a roster with too many players from the local Atlanta Falcons, who struggled throughout the fall. Still, crediting supporters for making the tip happen, he said it was all worth it.

“I was just the face of this; there’s tons of people that deserve credit,” he told the Daily News. “It made my year, as well as I hope it made her New Year’s.”

That was nice. Super nice.

Veteran Florida MALE cop grabs Female officer by the throat after she pulled him off suspect!! 

Chicago West’s 4th birthday was a dramatic one, to say the least. After dad Kanye West accused END_OF_DOCUMENT_TOKEN_TO_BE_REPLACED