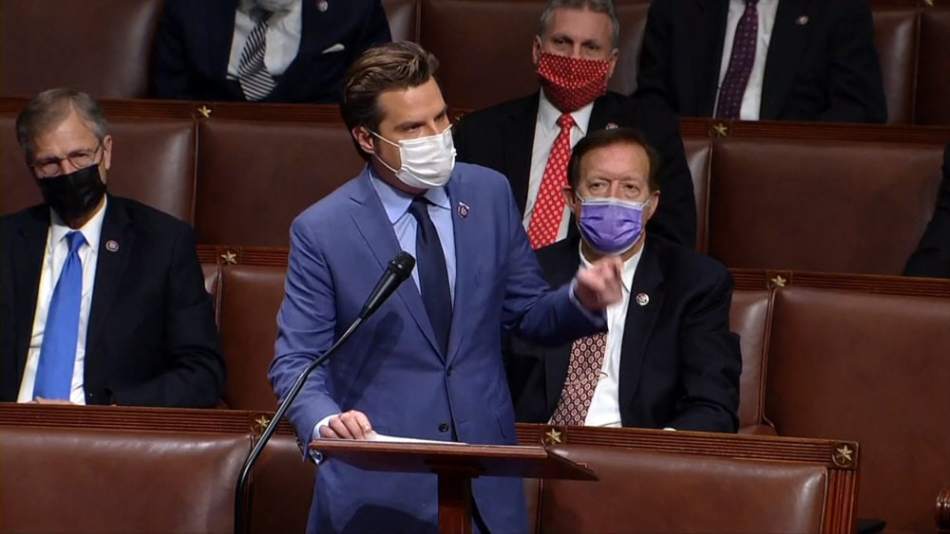 Speaking as the House debates a vote on impeaching President Trump a second time, Rep. Matt Gaetz, R-Fla., was loudly booed after he accused Democrats of setting cities on fire over the summer.

Gaetz, one of Trump’s closest allies and defenders, called impeachment “an itch that doesn’t go away with just one scratch,” referred to what he called the “the Biden crime family” and mentioned the same false claims about a wrongfully decided election that led to last week’s Capitol riot.

“Some cited the metaphor that the president lit the flame, well they lit actual flames, actual fires,” Gaetz said, drawing loud boos from Democrats as he pointed to their side of the chamber. “And we have to put them out.”

According to a pool report, as Gaetz began his speech, Rep. Andy Levin, D-Mich., lifted his right hand and pointed his finger to his head and twirled it as if to signal that Gaetz is crazy. He later shook his head several times through Gaetz’s speech.

Democrats shouted back at Gaetz as he ended his speech, giving him a smattering of boos and calling for “order” as the chair used the gavel to try to calm the scene.

I agree! Get all of them out. They have done nothing. And get others out END_OF_DOCUMENT_TOKEN_TO_BE_REPLACED