Donald Trump just made his last speech as President, and the key takeaway is … he promises to return to the spotlight, somehow.

DT and Melania both addressed the crowd at Joint Base Andrews — the First Lady’s remarks were very brief, but Trump took a little longer to reminisce. He touted what he considers his administration’s greatest achievements — including work they did for vets, stabilizing the economy (even amid a pandemic), fast-tracking the vaccine rollout, creating the Space Force and of course … tax cuts.

Trump says he can proudly say that he and his team “left it all on the field,” adding that when they’re all in Florida soon — they won’t have to look at each other and wonder, “what if?” He said he was proud of the job he’d done, explaining it’d been an honor to serve.

Trump actually wished the Biden-Harris administration luck, saying they had the foundation to do something great. But, then came a more ominous note from DT … he said that he WOULD be back in some form, basically promising that we hadn’t seen the last of him.

He told the crowd to “have a good life” … and that they’d be seeing him soon. As he and Melania left the stage, the Village People’s “YMCA” played for the last time as Trump said farewell to his family members and WH staff. They got onto AF1, and did a final wave. 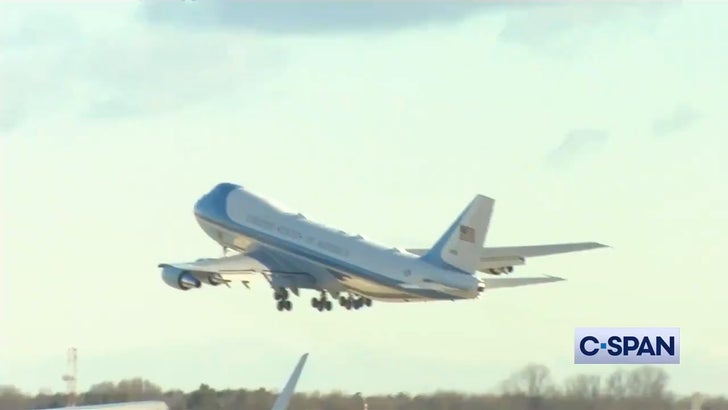 He also gave us one last reminder he’s all about TV production with the picture perfect timing of AF1 going wheels up as “My Way” ended.

And thus … the Trump presidency comes to an end.

5:33 AM PT — One of Trump’s faves is blaring at Joint Base Andrews … “Gloria” is playing so loudly on the PA system, as Marine One lands, that reporters there are getting drowned out. The man does love his disco era tunes.

He and Melania are addressing a crowd of about a couple hundred people gathered at the base. 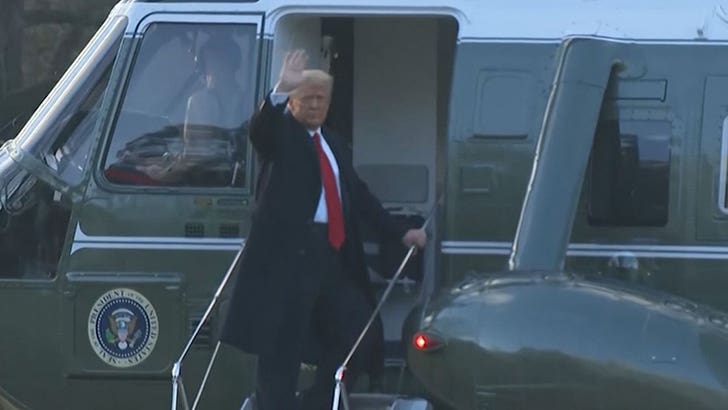 Donald Trumpis departing the White House for the final time as President, en route to a send-off party he requested as he leaves behind a tumultuous legacy that will certainly be … remembered.

DT is about to board the Marine One chopper early Wednesday morning on the South Lawn, where a few of White House staffers are standing by to say deuces to POTUS for good. He’ll be on his way to Joint Base Andrews — just outside of D.C., where he’s putting on a farewell ceremony for himself.

Invites for the event were sent out to Trump’s remaining allies, but details for what exactly is in store were hazy. The buzz has been 45’s looking for a major military-style parade, before he boards Air Force One. We’ll see if he gets it, and who shows up … it’s slated to begin at 8 AM ET.

One person who won’t be attending for certain is his Vice President Mike Pence. He’s said he will who be at Joe Biden‘s inauguration … presumably representing the administration. This is the first time in over a century that an outgoing Prez has blown off the Inauguration Day transfer of power.

In any case, once his farewell gala is done, Trump’s flying south for the winter — and beyond — to his Mar-a-Lago estate in Florida.

His decision to bolt outta D.C, at the crack of dawn isn’t all that surprising considering the hot political (and possibly legal) water Trump’s found himself in during these final weeks in office.

Of course, he’s already been impeached for inciting the Jan. 6 riot and storming of the Capitol — and could face a Senate trial.

The Senate could convict him, and also vote to bar him from holding any federal office again — due to his historic double impeachment — which would upend any potential Presidential run, which he’s suggested he might do.

Needless to say, this is most likely not the last we’ll see of Trump … impeachment aside, there’s wide speculation he could face criminal charges for the riot, business dealings in NY state and even Hollywood punishment from the SAG-AFTRA union.

Plus, he’s talked about possibly starting his own news network. We guess the only place you won’t see him, as of now, is Twitter.

We suppose there’s nothing left to say except, goodbye 45. Yes, his own catchphrase comes to mind too, but we’ll spare you. 👋🏽.

RunnersWorld.com In the women’s 100-meter final, Sha’Carri Richardson, Javianne Oliver, and Teahna Daniels made the Olympic team that END_OF_DOCUMENT_TOKEN_TO_BE_REPLACED