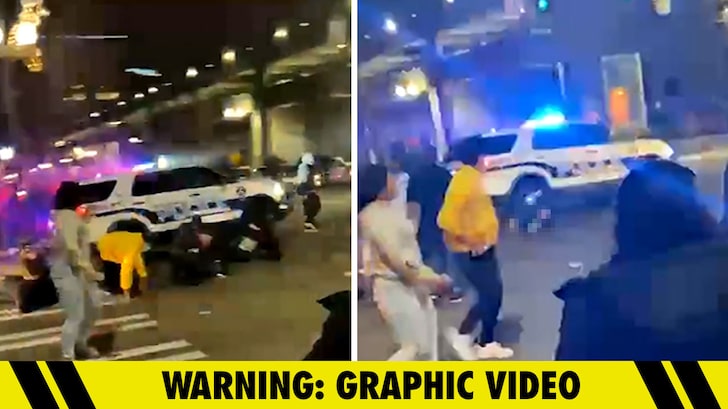 A Tacoma, Washington police officer ran over at least one person in his car on Saturday night.

According to TMZ, that around 100 people gathered on a street in the city, blocking the intersection, with some cars doing donuts and allegedly street racing. The authorities reported to the scene.

At some point, the crowd started closing in on the police officer’s SUV, with pedestrians banging on the windows and kicking the outside of the vehicle. In a statement, the police said that the officer drove into the mass of people, “striking one individual and may have impacted others” in an attempt to get out of the “unsafe position.”

“People hit the body of the police vehicle and its windows as the officer was stopped in the street,” the Tacoma police said. “The officer, fearing for his safety, tried to back up, but was unable to do so because of the crowd.”

In the clip, the officer revs up and drives forward, at which point the SUV runs over someone laying in the street. Still, the officer continues to drive. A person can be heard in the background screaming, “Oh my god, oh my god.”

Interim Tacoma Police Chief Mike Ake said he is “committed” to the department fully complying with an investigation into the incident. “I am concerned that our department is experiencing another use of deadly force incident,” he said, per NBC News. Authorities from Pierce County are spearheading an independent probe into the incident.

At least one person was transported to the hospital, and their condition is currently not known.

Girl, 11, finds parents dead in Missouri home. Both had Covid-19.

The 11-year-old daughter of a Missouri couple with coronavirus found her parents dead in their home, according to END_OF_DOCUMENT_TOKEN_TO_BE_REPLACED