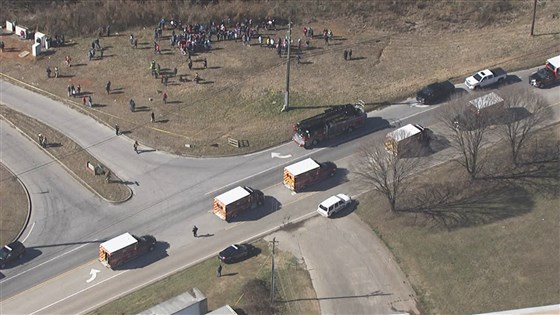 Authorities responded to a report of burns at 10:12 a.m. at the Foundation Food Group plant in Gainesville, about 60 miles northeast of Atlanta, and within 10 minutes they had updated it to a hazardous materials response, Hall County Fire Service spokesman Zachary Brackett said.

Many evacuated employees and several other people were “experiencing medical emergencies around the facility,” Brackett told reporters.

The victims’ names, ages and genders were not immediately disclosed.

“Those lost today include maintenance, supervisory and management team members,” he said. “Every team member is equally important to us and our hearts go out to their families.”

Hogg County Sheriff Gerald Couch said he was moved thinking about those who were killed after having clocked in Thursday morning with no expectation of their fate.

“A lot of these folks that came into work did not have any idea of what would happen, nor did their families,” Couch said. “They’re not in a profession that you would expect something like this to happen. But here we are. So that’s why I ask you for all your prayers.”

Five people died at the facility, and another person died at the hospital, officials said.

One of those hospitalized is a firefighter who is expected to be OK and should be released Friday, Brackett said.

“Don’t know much about the extent of the injuries beyond the conditions,” Sean Couch said, “but can say they’re all respiratory in nature.”

The cause of the leak, which was not immediately known, was under investigation by the Hall County Sheriff’s Office, the state fire marshal and the Occupational Safety and Health Administration, Brackett said.

Brackett also corrected early reports of a blast, saying, “No explosion has occurred.”

A school bus took 130 employees to a church for medical evaluation, officials said.

Early reports about the accident had identified the plant as Prime-Pak Foods. But the facility, which processes chicken products, changed hands to Foundation Food Group on Jan. 1, officials said.

“Our hearts are broken hearing about the tragedy that took place at Prime Pak Foods,” Gov. Brian Kemp said in a statement. “May God be a hand of peace, comfort and healing in the days ahead.”

It was heartbreaking to hear Britney Spears plead her case before a Los Angeles judge Wednesday, saying simply, “I just want END_OF_DOCUMENT_TOKEN_TO_BE_REPLACED

An attempt to honor Juneteenth has backfired spectacularly for one Georgia Ikea. An Atlanta branch of the Scandinavian furniture END_OF_DOCUMENT_TOKEN_TO_BE_REPLACED

Two participants in a Florida Pride parade were run over by a truck Saturday night, in what the mayor END_OF_DOCUMENT_TOKEN_TO_BE_REPLACED