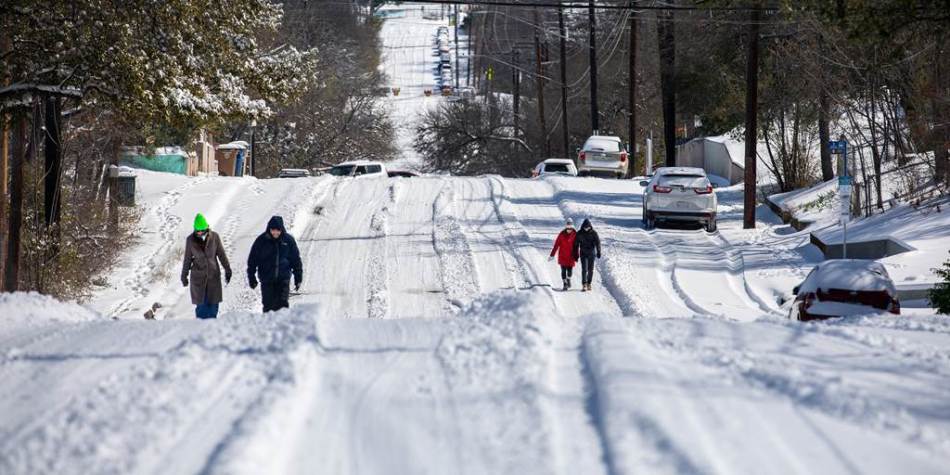 A deadly winter storm pummeling the country’s South and midsection left millions without power in Texas early Tuesday and spawned a possible tornado that killed three in North Carolina. More freezing weather was predicted in the coming days.

The suspected tornado that hit North Carolina’s Brunswick County around midnight ripped homes from foundations, snapped trees in half and injured at least 10 people, the county’s emergency services said Tuesday.

In Texas, two people, one a child, died from carbon monoxide poisoning in a car being used for heat, Houston Police said.

More than 4.2 million people woke up without power in Texas, according to poweroutage.us., as record-low temperatures brought a demand for power that the state’s electric grid could not keep up with.

The areas around Galveston and Houston were the hardest hit, according to poweroutage.us.

Snow and freezing rain were expected to persist, raising travel concerns for parts of the eastern Great Lakes to New England on Tuesday. Frigid Arctic air and dangerous wind chills were forecast in the Great Plains and Mississippi Valley through midweek, the National Weather Service said.

The storm dropped snow and ice from Arkansas to Indiana, and brought record-low temperatures from Oklahoma City to Minnesota’s Iron Range, where thermometers dipped to minus 38, the National Weather Service said.

Texas officials pleaded with residents to stay off the roads, conserve power and seal up drafty windows and doors.

At least 25 people have died from weather-related causes so far since Thursday, most of them in Texas, as the storm blanketed large swaths of the country.

In North Carolina’s Brunswick County, there were reports of people trapped in homes or feared missing as rescue operations got underway after the possible tornado, emergency management officials said. An estimated 50 homes were affected and a temporary shelter had been set up for the displaced. Power lines were also downed, leaving thousands without electricity, the Brunswick Electric Membership Corporation said.

“It’s something like I have never seen before. A lot of destruction,” the county’s sheriff, John Ingram, said Tuesday at a news conference. “It’s going to be a long recovery process.”

There were also fears of power outages and failures of backup generators at public health departments in Texas, where thousands of coronavirus vaccines are being held in cold storage.

Elsewhere in the state, San Antonio International Airport canceled all flights Tuesday, and the Dallas Stars delayed a National Hockey League game against the Nashville Predators, in an effort to conserve energy.

The Houston Chronicle was forced to stop printing after its plant lost power at 2 a.m. In a note to subscribers, the newspaper said that didn’t happened even when the city was battered by Hurricane Harvey in 2017.

Abilene, a city of about 170,000 residents, shut off its water services as a result of power outages at all three of its water treatment plants, it tweeted.

In a bid to save power, officials in Dallas said their skylines would go dark and Kansas City, Missouri, did the same. Kansas City, like cities scattered across the U.S., including in Tennessee and Iowa, were threatened with rolling power outages Monday.

The Pacific Northwest was hammered by a weekend storm and still dealing with lingering problems. Hundreds of thousands of people in Oregon were still without electricity after heavy snow and ice brought down tree branches this weekend and blocked storm drains in Washington state and Idaho, raising concerns about flooding.

In further unwelcome news for millions without power, more snow and ice was predicted late Tuesday and Wednesday along a storm front reaching from Texas to the Appalachian states. Oklahoma is set to be a likely epicenter for the heaviest accumulations through Tuesday night, the National Weather Service said.

The storm’s trailing cold front is also forecast to trigger showers and thunderstorms over South Florida, where there is some risk of flash flooding.

The Associated Press contributed to this report.

Say it ain’t snow! Parts of New York could be socked with up to half a foot of snow overnight END_OF_DOCUMENT_TOKEN_TO_BE_REPLACED

Three people were killed after a possible tornado ripped through North Carolina Tuesday night, destroying at least 50 homes and END_OF_DOCUMENT_TOKEN_TO_BE_REPLACED

Millions are waking up to frigid temperatures and icy roads Friday morning, the kind of conditions that led to a END_OF_DOCUMENT_TOKEN_TO_BE_REPLACED