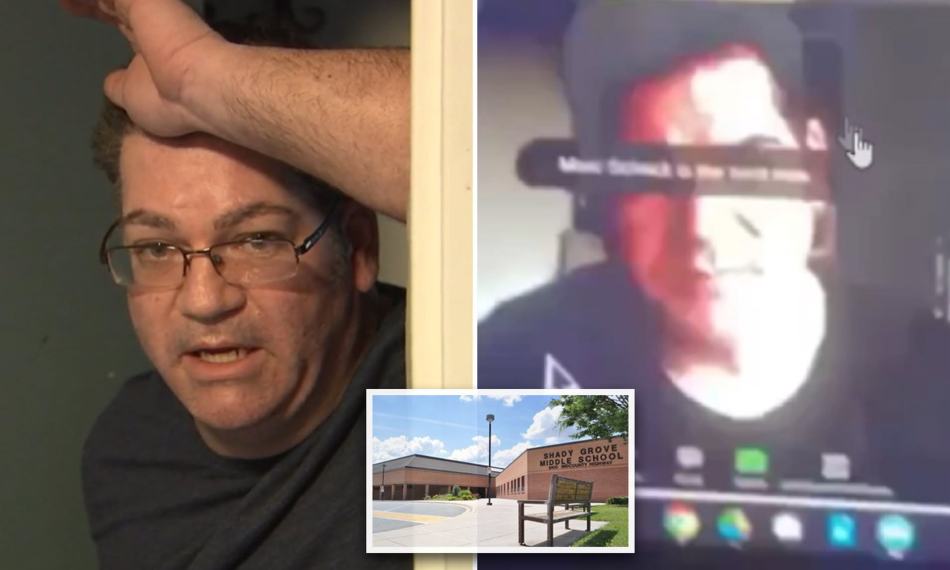 Marc Schack, an assistant for special education students at Shady Grove Middle School in Gaithersburg, Maryland, was placed on administrative leave on Monday after the footage that was filmed at the end of a history lesson was shared online.

Mr Schack’s name was on the screen as the host of the Zoom call, but seconds after he stood up, another name appeared replacing him as the moderator.

The teacher’s aide told Fox 5 that he was unaware of the video when he was placed on administrative leave, as he claimed he was informed that the school had “misplaced his background check file.”

Mr Schack added that he only discovered the reason for the action when he was contacted by reporters on Wednesday.

The teacher’s aide, who has worked for Montgomery County Public Schools for 21 years, also runs Pirate Magic, a business that throws “pirate parties” for children in the area.

Mr Schack claimed that he thought he was in the privacy of his residence at the time, saying: “I’m not a pervert or anything like that, you know. You gotta believe me on that”, and adding: “I’m only human. It was my bad.”

Shady Grove principal, Alana Murray, wrote to parents earlier in the week to confirm that a staff member had “engaged in inappropriate behaviour.”

Ms Murray added: “We ask that any student who may have this video posted on social media platforms take down the content and refrain from sharing with other students.”

A district spokesperson told the New York Post on Thursday that an employee had been placed on administrative leave, as an investigation is ongoing into “inappropriate behavior that was sexual in nature” earlier in the week.

“Per our procedures, we do not release the names of staff members that are under investigation,” the spokesperson continued, adding: “Local authorities were informed and are investigating as well.”

However, Montgomery County police spokesman Rick Goodale confirmed to Bethesda Magazine on Thursday that Mr Schack will not face charges as his alleged behaviour “did not rise to the level of a criminal offence under Maryland law”.

The Independent has contacted Montgomery County Public Schools and Pirate Magic for comment.

The husband of missing California woman Maya “May” Millete was arrested in connection with her apparent death on Tuesday, authorities said. Larry END_OF_DOCUMENT_TOKEN_TO_BE_REPLACED