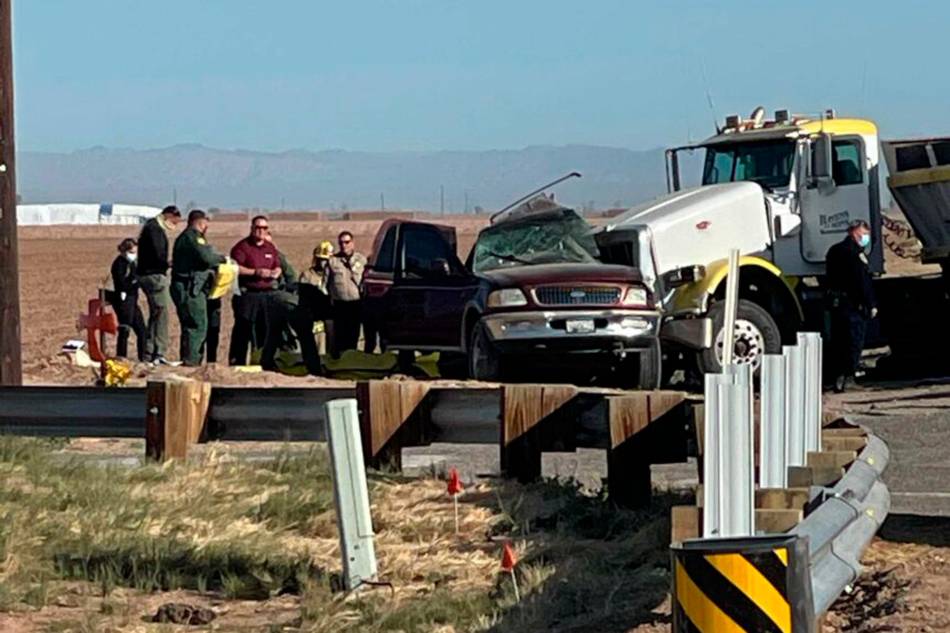 At least 15 people were killed in a collision between their large SUV and a truck hauling gravel near the Mexican border, officials said.

The horrific crash happened just after 6:15 a.m. local time off Highway 115 in Imperial County, according to the Los Angeles Times.

“We believe there was 27 passengers in this SUV that struck a semi-truck full of gravel,” said Judy Cruz, emergency room managing director at El Centro Regional Medical Center.

Fourteen people were pronounced dead at the scene and 12 passengers were injured in the crash about 10 miles north of the border, according to Cruz.

A photo of the scene shows a red Ford Expedition t-boned on the driver’s side by a big rig.

Three people were airlifted from the scene.

Seven others were taken to El Centro hospital, where one of the passengers died, according to Cruz.

At least 6 dead after gunman opens fire in Colorado supermarket

Several people are dead after a gunman opened fire inside a Boulder, Colorado supermarket Monday, according to reports. At least six people were killed in the shooting at Kings Soopers supermarket, law enforcement sources told local ABC affiliate Denver7. Local police said on said on Twitter they were responding to a report of an “active shooter” at around 2:30 p.m. END_OF_DOCUMENT_TOKEN_TO_BE_REPLACED

A student was reportedly shot at an Arkansas middle school early Monday. The incident at the Watson Chapel Junior High School in Pine Bluff came on the first day district schools were returning to full-day instruction after months of coronavirus restrictions, KARK-TV reported. The wounded student was taken to Arkansas Children’s Hospital by helicopter, according to KATV-TV.  END_OF_DOCUMENT_TOKEN_TO_BE_REPLACED

TMZ has learned … Tiger was staying at a hotel where a major network television show was being shot. Production sources tell TMZ, when the director arrived just before 7 AM, Tiger was driving his SUV very fast as he was leaving the property and almost hit the director’s car. The director was shaken enough END_OF_DOCUMENT_TOKEN_TO_BE_REPLACED