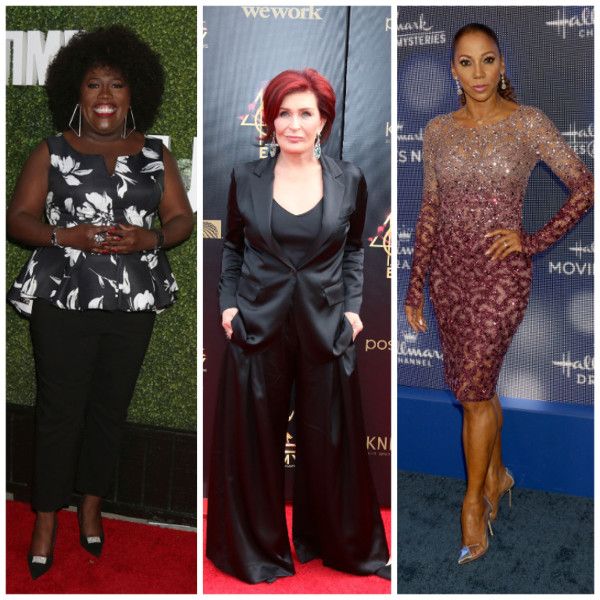 It backfired on him spectacularly.

Frazier interviewed Osbourne on Tuesday about the fallout from her explosive on-air discussion with her “The Talk” co-host Sheryl Underwood, which saw the show taken off-air pending an investigation.

He posted a photo from the chat on Instagram, tagging Osbourne and Underwood as well as former “Talk” co-host Holly Robinson Peete — who has accused Osbourne of calling her “ghetto” — and actress and outspoken racial justice advocate Amanda Seales. He also tagged Meghan Markle, who was the subject of the fiery exchange with Underwood, and “Bachelor” host Chris Harrison, who is embroiled in his own race scandal.

He suggested they have a “summit,” saying, “at some point we all have to reach a point where we can sit together and have a tough conversation about race. I don’t know what happens next for Sharon Osbourne, but I do know it’s time for a meaningful conversation, a learning moment. She is ready.”

Osbourne liked the post, but it did not go over well with several black actresses, including “Insecure” star Seale.

“You must be outta yo gotdamn mind. How bout you put your energy into providing a safe space for those on the show who have been terrorized by her rampant racism/classism/xenophobia,” she replied.

Frazier shot back: “Been doing that for years… I wanted to hear your thoughts that’s why I tagged you, I respect your opinion, not trying to get into a scrap.”

“Well, you missed the mark this time, BROTHA,” Seales said.

Frazier ended up deleting the post. On Wednesday, he attempted to clarify his intentions. “I was suggesting there be a place, in the mainstream where people (like Sheryl and Holly) could actually express their feelings without being muted or muzzled (and I can tell you that there were people who worked to mute Hollys [sic] voice after she left),” he said.

Peete, who believes Osbourne may have had a hand in getting her fired from the show in 2011, appreciated the follow-up post.

“Thank you for acknowledging the way I was treated after being let go from ‘The Talk’ in such an unnecessary, mean-spirited way. Sharon was a part of that. She knows it. No matter what she says. Now it’s all coming out and I don’t think she is close to being ‘ready’ for any kind of accountability. That’s just my opinion,” she said.

Seales, on the other hand, reposted his original post and told him to, “Cut the kumbaya tactics. It’s so easy to protect black women.”

“It is not the responsibility of black folks to educate white folks on how they cannot be trash ass folks. Ok, they [bleeping] made up racism. Why the [bleep] we gotta teach you how to not be racist,” she said in a five-minute video. “To expect us to do that and to, as a black person, try and rally up folks into that space is… just foolish and also not respectful of our time and of our energy.”

She added that Underwood and Robinson Pete have been “at the brunt of this woman’s racist bullsh-t,” and said, “so basically you’re asking victims to come and have a nice little sitdown with their attacker, so that this bitch can feel better? No, we are not on the rehabilitate white people train.”

A rep for “ET” and Frazier did not comment.

Rihanna and A$AP Rocky kept it low-key while out to dinner Friday night in Miami. The “Work” songstress, 33, and the “Fashion END_OF_DOCUMENT_TOKEN_TO_BE_REPLACED

Patti LaBelle is happy to share things with her friends — but in a new interview, she reveals the time that Sir Elton John nearly END_OF_DOCUMENT_TOKEN_TO_BE_REPLACED