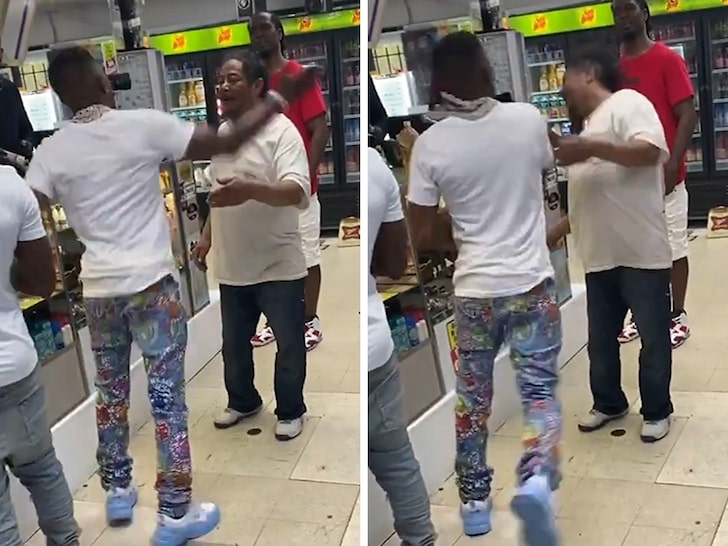 Boosie isn’t with all the fake acting when it comes to making movie magic — dude actually puts some real hurt into his product … just ask this guy who got an open palm to his dome.

The Louisiana rapper was reportedly down in North Carolina shooting a music video for his and DaBaby‘s single together, ‘Period,’ where they were apparently shooting a scene in a liquor store of some sort. Seems the video’s gonna have some explicit violence featured.

Check out this guy — who appears to be a hired actor and/or extra on set — mouthing off to Boosie as he and DB try to buy some stuff at the checkout counter. He’s saying Boosie isn’t a real rapper — and before you know it … he’s getting his head rocked.

Boosie unleashes a brutal slap straight to the man’s face — and no, he didn’t ham it up for the cameras either … this was a straight-up real one, which was captured from multiple angles.

As brutal as it looked from afar, it sounds even worse when it was filmed from up close.

Like we said, the man seems to be in on the scene — it’s not like this was done at random or out of malice or anything like that. Still, even if it was for the video … a lot of people are saying Boosie didn’t have to slap the guy this hard for real.

It looks like Boosie and/or DaBaby paid him for his troubles — there’s a follow-up video where one of them are seen handing this brave fella a cool $500. Apparently, he got an extra $54 as a “tip” … so, all in all — he made $554 for the wild stunt.

The stylist who prepped Janet Jackson’s look for her infamous 2004 Super Bowl appearance with Justin Timberlake tells Page Six that Timberlake pushed for the “wardrobe malfunction” in an attempt to outdo Britney Spears, Madonna and Christina Aguilera, who had wowed the world months earlier by scandalously kissing at the MTV Video Music Awards. Superstylist Wayne END_OF_DOCUMENT_TOKEN_TO_BE_REPLACED

QUAVO & SAWEETIEELEVATOR ALTERCATION CAUGHT ON VIDEO …Before Their Breakup

Quavo and Saweetie‘s issues appear to run much deeper than alleged infidelity because they had a fight in an elevator — before they split — and the altercation was all captured on video. TMZ obtained surveillance footage of the struggle, which went down at an apartment complex in North Hollywood. It shows both of them standing outside END_OF_DOCUMENT_TOKEN_TO_BE_REPLACED

Nike on Sunday denied collaborating with rapper Little Nas X on his controversial “Satan Shoes” — which feature a drop of human blood and demonic imagery, according to a report. “We do not have a relationship with Little Nas X or MSCHF,” Nike told NBC in a statement. “Nike did not design or release these shoes and END_OF_DOCUMENT_TOKEN_TO_BE_REPLACED