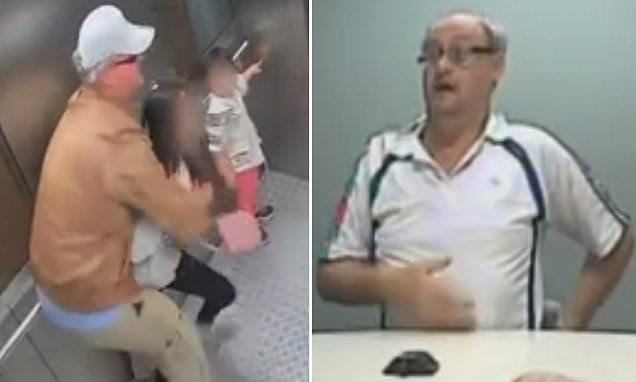 Disturbing new video shows the moment a New Zealand police department employee corners a 13-year-old girl in an elevator and gropes her as she frantically attempts to get away.

Glenn Roche, 54, who was found guilty of indecent assault this week, is seen in the footage chasing the youngster into the elevator after a day out with her family, the New Zealand Herald reported on Thursday.

Roche seems to be playfully chasing the girl but then the sicko grabs her, fondles her and tries to kiss her while she tries to wrestle free, the footage posted by TVNZ-TV shows.

The girl later told authorities that she still suffers nightmares from the harrowing July 2019 assault, according to the Herald.

But Roche told the judge he was just playing around and claimed there was “no sexual gratification on my behalf.”

“My hands have slid up her body as she slid to the ground,” the sicko told police. “My mind has gone off on a tangent like this is a challenge to me. I can get her and give her a kiss on the cheek like her two sisters and mum.”

“She contributed to that occurring by releasing her body weight and sliding through my hands,” he said, blaming his tiny victim.

Police said Roche had been out with the girl’s mom and siblings. It is unclear what his relationship to the girl and her family was.

The judge wasn’t buying his excuse, however, and found Roche guilty.

He was also suspended from the police department, where he worked as a civilian employee, according to the reports.

Saturday will mark the 20th anniversary of the Sept. 11, 2001 attacks on the Twin Towers, meaning New York END_OF_DOCUMENT_TOKEN_TO_BE_REPLACED