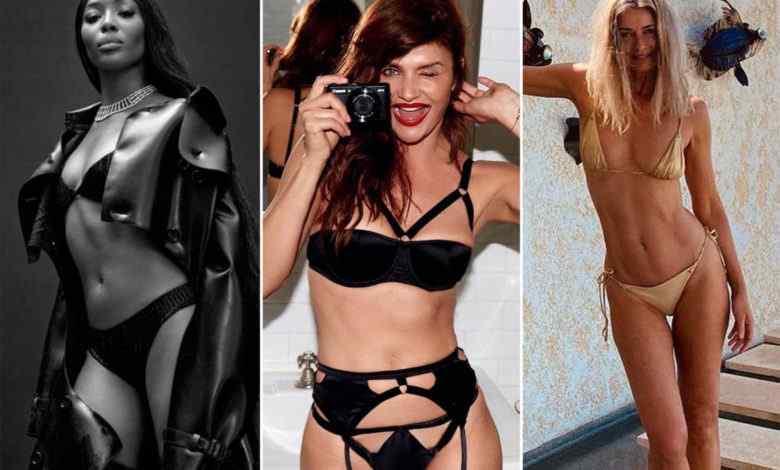 Now these are some sexy mother strutters.

Cutting hourglass figures in the trendiest fashions, top models over 50 are re-emerging as timeless beauties on social media timelines everywhere.

In fact, supermodel Paulina Porizkova, 56, recently emphasized to Page Six just how important it is for the fashion world to begin embracing the beauty of women of all ages.

“I think we’ve made enormous strides in accepting all different sorts of beauty,” she said. “But age, ageism, that’s kind of like the last frontier.”

And like Porizkova, pioneering runway slayers of the ’70s, ’80s and ’90s like Naomi Campbell, 51, Cindy Crawford, 55, and Christie Brinkley, 67, all still look picture-perfect in their bikinis and bodycons.

So whoever said “age before beauty” must not be following these classic cuties on the ‘gram.

Here’s a roster of the digital catwalk’s most enduringly hot models.

No need to double-check your calendars — it’s not 1996 — Helena Christensen is just still smoking hot. Laced in naughty-girl noir lingerie by Coco de Mer, the 52-year-old supermodel put social media in a chokehold last week when she shared sultry snaps of herself in bondage-inspired intimates on Instagram.

No stranger to showing off her goodies in silky underthings, Christensen recently reprised her role as a Victoria’s Secret runway babe, posing for the high-end panty and bra brand’s holiday campaign in December — 24 years after she made her debut on the VS stage.

Ring the alarm, she’s the hottest new mom. With her brand new baby in tow, Campbell, 51, continues to reign as mother superior of the supermodel assemblage. With a body that just won’t quit, the 5-foot-10 CFDA Fashion Icon Award winner commanded the May 2021 cover of posh pop culture periodical V Magazine in an all-black Tom Ford bikini with a cropped jacket and thigh-high boots by Burberry to match. Talk about hitting the badass mother lode.

It’s hard not to slay on Instagram when “fierce” is literally in your name. Macpherson, 57, is flexing her toned legs, tight abs and tongue-wagging tush for her more than 584,000 online followers — and they’re loving every inch of the 6-foot-tall seasoned supermodel.

Nicknamed “The Body” in 1989, the Australian stunner is still living up to her sobriquet by taking good care of her body with products from her plant-based wellness company, WelleCo. And with an apple bottom like hers, the mom of two deserves two big green thumbs up.

From starring in the 1978 film “Pretty Baby” to beaming in 2021 as a foxy leading lady, Shields, 56, has got it going on — and her “it” factor just keeps going and going. After recently giving Instagram fans a peek at her lusciously plush cheeks — a sexy swimsuit shot captured by her good friend and fellow fox Helena Christensen — the 6-foot-tall showstopper re-solidified herself as one of the most darling dreamboats the modeling and movie world has ever seen.

Glamour grandma of four, Johnson, 68, is just as stunning now as she was when she debuted as the first black model to grace the cover of Vogue in 1974. Whether flexing her lusty, long legs poolside or posing alongside her daughter Anansa Sims, 42, for Elle Magazine, Johnson is living proof that age ain’t nothing but a number.

On the brink of humanly impossible radiance, there’s Christie Brinkley. The OG of the hot girls, Brinkley, 67, is still sizzling up swimsuit season with the same fire as the previously unprecedented three-time cover girl of the iconic Sports Illustrated Swimsuit Issues between 1979 and 1981. The mouthwatering mama of three — including model daughter Sailor Lee Brinkley-Cook — recently flaunted her flawless figure on the beaches of Parrot Cay island in Turks and Caicos. And from sea to shining sea, this American beauty will forever be a shore thing.

Stop what you’re doing: It’s time for a Paulina appreciation pause. With a body that deserves a round of applause, Porizkova, 56, stole the show on Instagram this week, showcasing her incredibly sculpted curves in a gold string bikini. The Czechoslovakia-born bombshell, who is dating director Aaron Sorkin, checks all the same boxes she did when her banging beach body first rocked the cover of the Sports Illustrated Swimsuit Issue in 1984. Now that’s a tidal wave of everlasting T&A.

The babe with the beauty mark continues making her mark on beauty. Shining as the supermodel standard, Crawford, 55, spent the latter half of May stunning on the sands of Miami Beach, where she and husband Rande Gerber just purchased a $2.3 million penthouse. And whether she’s seductively sucking down a can of soda in 1992 or sensually soaking up the sun last month, it’s fair to say that the 5-foot-9 masterpiece and mother of model Kaia Gerber is the perennial gift that keeps on giving.

From dazzling as the pièce de résistance on runways in Paris to palming a peach on Sundays in Atlanta, Cynthia Bailey’s beauty abounds. Before becoming a fab fixture of Bravo’s “The Real Housewives of Atlanta,” the 54-year-old took the fashion world by storm with her striking features and faultless frame. And Bailey recently blessed fans with glimpses of her bodacious body in a bathing suit while filming scenes for the forthcoming “Real Housewives All-Stars” in Turks and Caicos.

From fries to footwear.  To celebrate his 29th birthday on Friday, Travis Scott released the Air Jordan 6 in “British Khaki” ($250), his latest sneaker collaboration with END_OF_DOCUMENT_TOKEN_TO_BE_REPLACED

Michael Kors’ 40th-anniversary show was an ode to Broadway

Michael Kors’ 40th-anniversary show was an ode to Broadway, complete with a star-studded (virtual) audience, a supermodel-packed runway and an homage to some of END_OF_DOCUMENT_TOKEN_TO_BE_REPLACED

Sharon Stone’s still got it. The Oscar-nominated actress, 63, nodded to her iconic leg-crossing scene from “Basic Instinct” for Elle Spain’s May END_OF_DOCUMENT_TOKEN_TO_BE_REPLACED