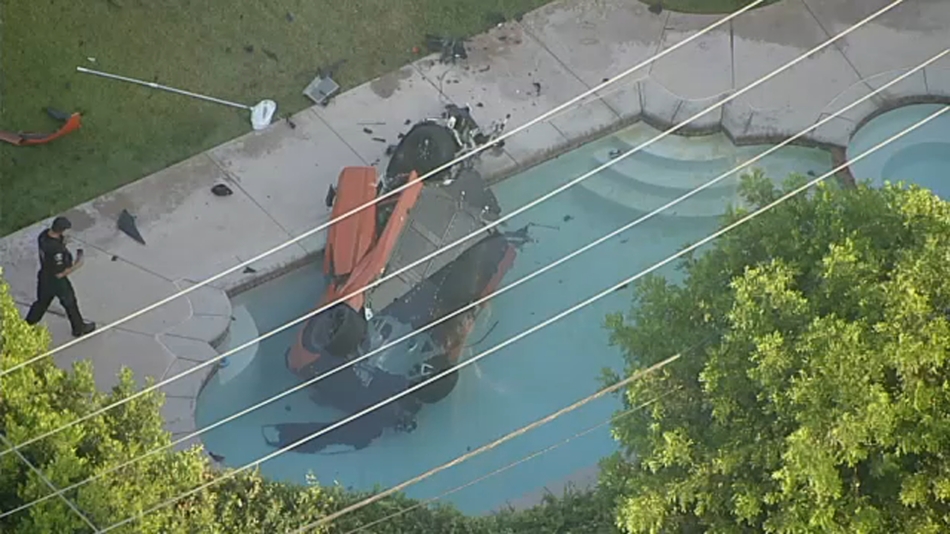 A speeding Corvette struck a median in California and went airborne before landing in a backyard pool, killing two people and seriously injuring a third, police and witnesses said.

Three people inside the two-seat Corvette convertible were ejected from the car after it launched into the air upon striking a median in Chino at about 2 a.m. Wednesday, police said in a statement.

A 21-year-old woman was pronounced dead at the scene near Schaefer and East End avenues, while a 27-year-old man later died at a hospital. A third victim, a 23-year-old woman, was hospitalized in serious condition, Chino police said.

The cause of the wreck remained under investigation Wednesday, but witnesses and police told NBC Los Angeles the Corvette had been speeding. It’s unclear if drugs or alcohol were involved or if anyone inside the sports car had seatbelts on, according to the station.

“I heard this car just zipping around the curve,” neighbor Deborah Laugherty said. “I didn’t hear like a screeching or anything like they tried to stop, then I got up and a little bit later I saw flashing lights.”

Homeowner Art Guerrero said he heard a loud screech followed by a “bang” as the Corvette landed in his pool. He then found the 23-year-old woman who was ejected from the car nearby as cops responded, Guerrero told CBS Los Angeles.

“The officer was talking to her, ‘Stay awake, stay awake,’ trying to keep her up,” Guerrero recalled.

A tow truck removed the crumpled Corvette from Guerrero’s pool, video showed. He told CBS Los Angeles he was thankful that his children and grandchildren weren’t using it at the time.

Neighbors said the intersection is an ongoing concern, as drivers frequently speed or strike medians in both directions. The 45-mph speed limit drops abruptly to 15 mph around the curve that the Corvette failed to negotiate, CBS Los Angeles reported.

“I do walks every day and I’m not walking on this corner anymore, around this street because there is so much incoming traffic and I’m afraid that somebody’s going to jump the sidewalk and run me over,” neighbor Maria Jasso told the station.

None of the victims were immediately identified. Chino police Sgt. Jesus Jacquez told the Los Angeles early Wednesday that detectives would be “doing their due diligence” in the ongoing investigation.

A message seeking additional details from Jacquez was not immediately returned Thursday.

The husband of missing California woman Maya “May” Millete was arrested in connection with her apparent death on Tuesday, authorities said. Larry Millete, 39, has been END_OF_DOCUMENT_TOKEN_TO_BE_REPLACED

Video captured the chilling moment a deranged intruder broke into a Tennessee home last week, forcing a terrified young mother to barricade herself and END_OF_DOCUMENT_TOKEN_TO_BE_REPLACED