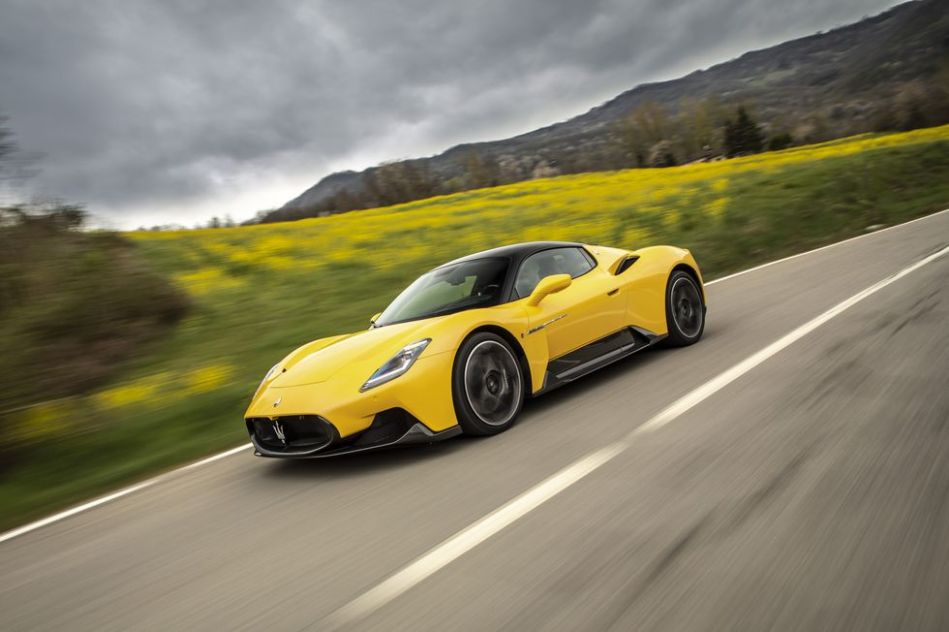 Not many automakers have the audacity to take on Ferrari. But when your name is Maserati and you’re looking to crown your lineup with a new 621-hp mid-engine supercar, you’re not going to let a former partner—no matter how storied—stand in the way. The MC20 is the first mid-engine Maserati developed and produced in-house since the Bora and Merak in the early ’70s. The coupe driven here comes first; an electric version and a convertible follow in a year or so.

In 1997, Maserati and Ferrari came together under Fiat, a move that curbed Maserati’s supercar ambitions. They split in 2005, and while Maserati still uses Ferrari engines in various models as part of a long-running supply deal, corporate strategy in Modena now calls for complete engineering independence from Maranello. The two-seater MC20 effectively resets the Italian carmaker, which says it will use key parts of its mechanical package—including the new V-6 engine—in upcoming models as part of a broader rejuvenation of the brand. In addition to being the top Maserati model, the MC20 will also bring the company back to racing. Dallara, an Italian race-car manufacturer, collaborated with Maserati on developing the MC20.

The basis for the new car is a carbon-fiber tub, with aluminum substructures supporting the suspension and engine. The body is predominantly carbon fiber. Designed to accept both gasoline and electric powertrains, the MC20 is just over two inches longer than a Ferrari F8 Tributo. The gas MC20 should weigh about 3600 pounds in road spec.

The engine, known as Nettuno (Italian for Neptune), is fitted with dry-sump lubrication and patented prechamber ignition technology cribbed from Formula 1. The twin-turbocharged 3.0-liter V-6 boasts 621 horsepower and 538 pound-feet of torque. The eight-speed dual-clutch transaxle supplied by Tremec features a limited-slip differential as standard; an electronically controlled diff is optional.

A broad powerband allows the MC20 to chug along below 4000 rpm in GT mode, where a heady torque curve provides easy thrust. But in Sport mode it’ll happily chase the 8000-rpm redline in shorter gears. The prechamber ignition system seems to foster outstanding throttle response and great versatility across the rev range. The power delivery is linear, and as with the best engines, the harder you work it, the more determined it becomes. Sound rushes into the cabin without synthetic enhancement. The speed of the upshifts is excellent, whether on part throttle or under full load, but the dual-clutch gearbox doesn’t always live up to the V-6’s greatness, with an occasional clunky downshift.

We’re expecting the MC20 to sprint to 60 mph in 2.8 seconds thanks in large part to launch control. Maserati says the top speed is 202 mph, and the engine’s heroics, combined with huge levels of traction, ensure the acceleration doesn’t let up until the speedometer needle is well into triple digits.

And the MC20 turns in to corners beautifully. The carbon-fiber structure provides a rigid base, and there is a finely honed feel to the chassis, which mates adaptive dampers to a control-arm setup in front and a multilink suspension in back. The ride is good—almost daily-driver good—provided the dampers are in their soft mode. The weighting of the electrically assisted steering is light. But it’s also quick (2.2 turns lock to lock) and precise, allowing you to place the MC20 confidently at corner entry. It is a car most drivers could drive hard without real trepidation. Turn the stability control off and you can harmlessly send the rear sideways. The point of breakaway is well communicated, allowing you to unsettle the tail and then hold big slides on the throttle.

Strong brakes are part of the deal. Optional 15.4-inch front and 14.2-inch rear carbon-ceramic rotors are grabbed by six- and four-piston Brembo calipers, respectively. The brakes like to have some heat in them before they bite with proper intent, but when they do, they generate breathtaking stopping power.

Priced at an estimated $213,000, the MC20 takes aim at some heavy-hitting mid-engine rivals. Maserati hopes for annual sales to reach 1500, split between the roadgoing car we drove and the upcoming racing version. North American deliveries are expected later this year. The MC20 makes us wonder about all the supercars Maserati didn’t build when it was in the shadow of the prancing horse. Now that it’s unfettered by team orders, Maserati is poised to show what it can do.

If you’ve ever felt indecisive about what color vehicle to buy, BMW may have the car for you. The German automaker showed off its new END_OF_DOCUMENT_TOKEN_TO_BE_REPLACED

On specs alone, you wouldn’t guess that the Kia Telluride is 10Best material. It’s a family SUV of normal size with normal power and a normal price. END_OF_DOCUMENT_TOKEN_TO_BE_REPLACED

When people ask their neighborhood car expert (that’s you) which car to buy, they usually have an answer in mind and are just looking for END_OF_DOCUMENT_TOKEN_TO_BE_REPLACED