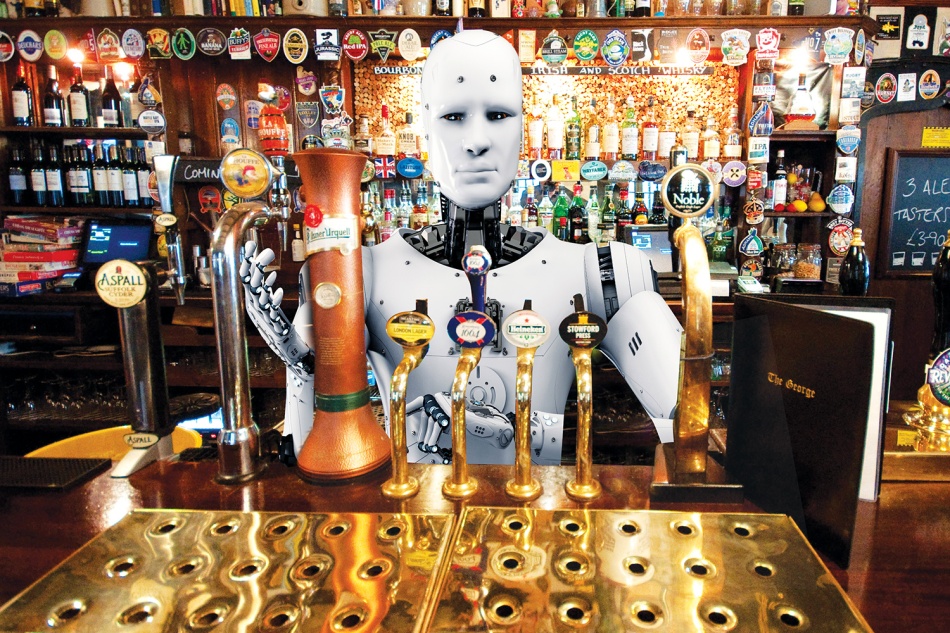 When you go to a pub or bar, if the staff are friendly and helpful it very much adds to your enjoyment of the experience.© PicasaThe Cecila robot bartender uses AI to be able to react to and respond to orders

By contrast, having to deal with a surly person serving up your pint or margarita it risks significantly reducing your happiness levels.

For people with a regular drinking establishment of choice, the person behind the bar can even become a friend and confidant. Or, as renowned Canadian economist, Harry Gordon Johnson once said: “The greatest accomplishment of a bartender lies in his ability to exactly suit his customer.”

Soon, however, those bar staff might not even be human. Enter Cecilia, a robotic bartender that mixes and serves cocktails, and uses artificial intelligence (AI) to talk to customers in much the same way that Alexa, on an Amazon Echo speaker, or Siri, on an iPhone can respond to you.

The unit looks a bit like a tall fruit machine, only with an animated female barmaid – Cecilia – appearing on a large, upright video screen. You either tell her what cocktail you want, or order it on the below touch-screen, and pay for the drink by tapping your bank card or phone.

Your cocktail is then mixed and made inside the machine, and dispensed into a glass at the vending slot.Should human bar staff be worried?

The company says that each unit can be filled with 70 litres of different types of spirits, and that it can serve up to 120 cocktails per hour. At least if customers don’t stay for extended chats.

The firm first released the robot on 24 February of this year – World Bartender Day. Since then it has already been used at corporate events held by Microsoft, accountancy group KPMG, and tech firm Cisco.

Mr Kobi believes that the traditionally change-resistant pubs and bars sector may increasingly turn to such technology in a bid to “wow” customers, and to stand out from the crowd.

“Companies realise they need to do different things than others to attract people there,” he says. “Technology and innovation can do that.”

Proponents of bartending robots also note that they can help bars become more efficient – which, in turn, helps their bottom line.

“The main issue when you have a venue is constant problems with the workforce,” says Alan Adojaan. He is the chief executive of Yanu, an Estonian company that recently unveiled a rival bartending robot.

“There’s always a shortage of workers. You have to train them, but then they leave. There’s a huge turnover of staff.”

He says that robot bar staff can help address this problem, and also put a halt to other factors, such as overly generous pouring of measures, or giving free drinks to friends, issues he says that may venue owners take as a “given.”

“For instance, if someone orders a gin and tonic on a Yanu, you [the bar owner] can specify that the robot pours four centimetres of gin, and the exact amount of tonic and lemon juice,” says Mr Adojaan.

He adds that another benefit of a Yanu (cost – $150,000) is that it can serve drinks faster – and to more people – than human bartenders would ever be able to.© BBC’I’ll buy five items and only keep one of them’

New Tech Economy is a series exploring how technological innovation is set to shape the new emerging economic landscape.

“We are aiming for places that have a huge turnover of clients, such as sports events, festivals or nightclubs,” he says. “The machine is very fast – it can work as fast as three and a half bartenders and make 100 drinks an hour. It can hold up to 1,200 drinks.”

Additionally, bartending robots can provide 24-hour service in environments in which doing so with a human bartender can prove costly and difficult.

“Think of a 24-hour hotel lobby, or an airport. For venues like that you’d need to hire three shifts of people, and that’s quite expensive,” Mr Adojaan says. “So those will be our playing grounds, mostly.”

One of its Yanu robots is currently making alcohol-free cocktails at the Estonian pavilion at the World Expo event in Dubai.

As is the case with other industries, the rise of bartending robotics is likely to raise concerns about job losses.

Emanuele Rossetti, the boss of Italian robot bartender maker Makr Shakr, says that while some barmen and women will lose their jobs, the hope is that they can find alternative work within the wider hospitality sector.© Getty ImagesFirms say some of the new robot bartenders can work as fast as three and a half human bar staff and sever up 100 drinks an hour

To help affected human bar staff do just this it launched an initiative in the US in 2019, whereby for each sale of one of its units it would give a barman or woman $1,000 (£747) towards helping them retrain.

Yet, while some experts in robotics see the technology becoming widespread, others in the hospitality sector say that human bar staff need not worry.

“Standalone robot bars are [instead] being set up at entertainment and hospitality venues, or at events where otherwise no traditional bar would have been set up.”© Beat BrechbuehlF&P Robotics, which makes the Barney Bar, pictured, says such robots won’t replace many human bar staff

UK pub chain JD Wetherspoon is certainly not interested in buying a fleet of robots to work behind its bars. “In a word – no,” says a spokesman for the firm. “Wetherspoons would never do this.”

Yet Yanu’s Mr Adojaan says he is confident of future sales to regular bars, and especially nightclubs.

“First, having a discussion with a bartender is a cliché from the movies, at least here in Europe,” he says. “And in a nightclub, you don’t have a discussion. You shout at the bartender to get your drink faster.”

The bar staff themselves, he adds, often have the unenviable task of dealing with “obnoxious drunk people”. “As with other jobs that aren’t enjoyable, or artistic, on a daily basis, they’ll get replaced by robots,” he says.

And for customers who do like to have a chat with their barman or woman, Mr Adojaan says that the robots will gain more and more human-like personalities over time.

“We’re trying to develop something… that can hold a conversation, or crack a joke, ask if you liked your drink, or suggest another one, he says. “The most interesting part of the project is the effort to make it [appear] alive, or have character.”

A Texas school district is investigating a viral video of a white high school hitting a Black teacher. The clip, which was taken at END_OF_DOCUMENT_TOKEN_TO_BE_REPLACED