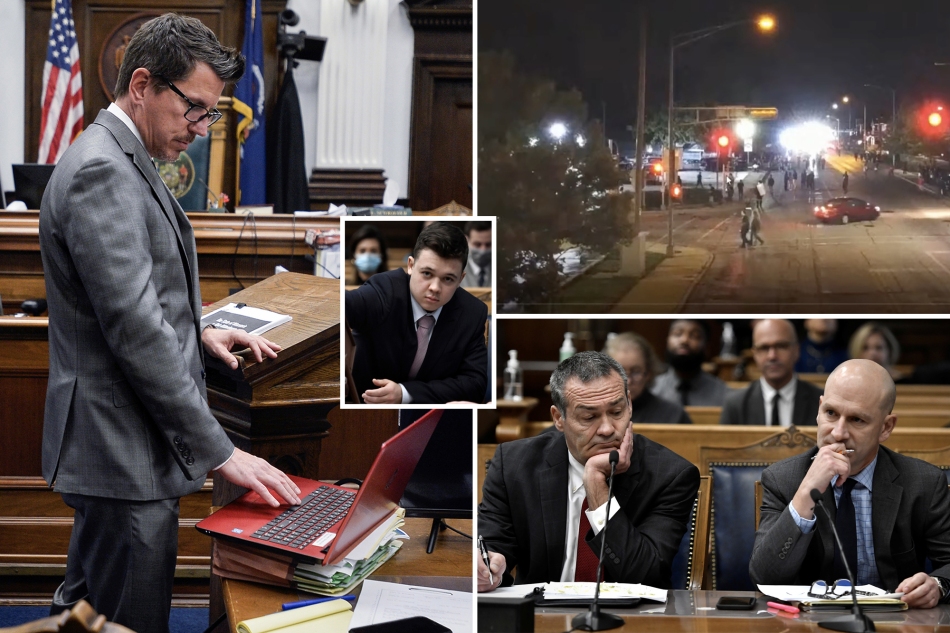 Kyle Rittenhouse’s legal team accused prosecutors of holding back key video footage that is at the heart of their case in a formal motion for a mistrial, court documents show.

Lawyers for the 18-year-old Kenosha gunman already called for a mistrial during the hearing, and filed a formal seven-page request less than an hour before closing arguments Monday, the Chicago Tribune noted.

The motion argues any conviction should be overruled and seeks to forbid any chance of a retrial if Rittenhouse is cleared of the five felonies he faces for the deadly triple shooting at last year’s Kenosha riots.

It highlighted some of the prosecutors’ missteps that already had Judge Bruce Schroeder railing at them, including mentioning evidence they’d been warned not to use and also making a play on the teen’s right to silence.

But it also accused prosecutors of holding back the high-resolution drone footage used to try to suggest that Rittenhouse had been the aggressor when he claimed self-defense before the first shooting.

Prosecutors gave the defense a hard-to-see, low-res version in a 3.6MB file — less than a third of the high-res file they actually had, the motion states.

They only got the better-quality clip, already used by prosecutors, on Saturday, after testimony had concluded, the motion stated.

“The video footage has been at the center of this case,” the defense motion states, further calling it the “linchpin in their case.

“The failure to provide the same quality footage in this particular case is intentional and clearly prejudices the defendant,” the motion insisted.

The defense insisted that prosecutors’ missteps during the hearing were “clearly intentional” — even suggesting they wanted a retrial to “get another ‘kick at the cat’ because the first trial is going so badly.”

“The testimony in this case up to that point had not gone very well for the prosecution,” the motion stated, citing witnesses who appeared to corroborate Rittenhouse’s claim that he was under attack when he opened fire.

The motion to dismiss has yet to be formally addressed in court. It will likely be addressed after the jury finishes its deliberations, which on Wednesday are entering a second day.

The jury of 12 deliberated for a full day Tuesday without reaching a decision.

Several appeared tired as they walked into the courtroom Tuesday evening and indicated with a show of hands that they were ready to go home.

Rittenhouse faces life in prison if convicted for using an AR-style semi-automatic rifle to kill Rosenblaum and Anthony Huber, 26, and wound Gaige Grosskreutz, now 28, during the BLM riots when he was just 17.

A Texas school district is investigating a viral video of a white high school hitting a Black teacher. The clip, which was taken at END_OF_DOCUMENT_TOKEN_TO_BE_REPLACED