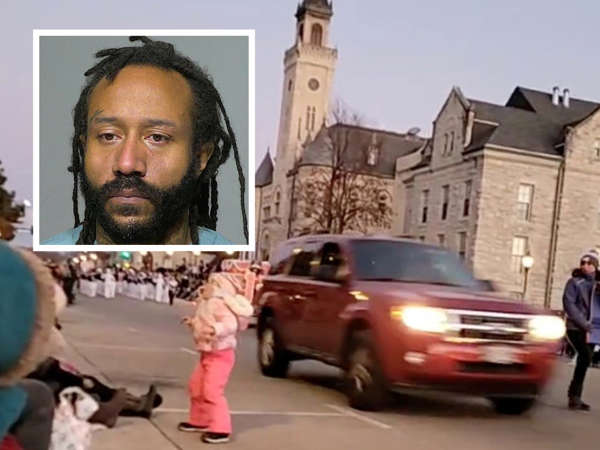 Dramatic doorbell video captured the moment the suspect in the deadly Christmas parade vehicular rampage in Wisconsin was collared – after reportedly telling the homeowner he was homeless and waiting for an Uber.

The Ring footage obtained by NBC News shows Darrell Brooks, 39, minutes after he allegedly mowed down revelers at the Sunday parade, where five people ranging in age from 39 to 81 were killed and 48 others injured.

The T-shirt-clad suspect is seen shivering outside the house, which is located about a half-mile from the parade route, and knocking on the door just after 5 p.m. Sunday, about 20 minutes after he allegedly plowed into the crowd.

“I called an Uber and I’m supposed to be waiting for it over here, but I don’t know when it’s coming,” he is heard telling resident Daniel Rider, according to NBC News.

“Can you call it for me please? I’m homeless,” he adds.

Rider told the news outlet he had been on a hunting trip and was watching a football game at the time of the incident, so he was unaware of what had just happened nearby.New videos have emerged showing the Wisconsin parade rampagePlay Video

The resident told NBC News that he invited Brooks inside, gave him a jacket, made him a sandwich and let him use his phone.

“All of a sudden, I look outside my street and I see a few cop cars drive by and I’m getting extra nervous,” he said, adding that he then asked his guest to leave.

Brooks left but then began pounding on his door again, saying he left his ID behind, after a neighbor called the cops, NBC News said.

The doorbell footage shows cops ordering the suspect to put his hands up.

Meanwhile, another neighbor told the Sun that Brooks “was always a little off.”

“I didn’t know him more than ‘Hi’ and ‘Bye’ but I remember seeing that red truck parked there,” the person, who didn’t want to be named, told the news outlet, referring to the suspect’s Ford Escort SUV.

Another neighbor, who identified herself as Ebony, told the Sun: “He must’ve snapped. The whole thing is messed up but it doesn’t surprise me.”

No one answered the door of the home that neighbors said Brooks shared with his mother, according to the Sun.

CNN.com Judge asks Ahmaud Arbery’s father to leave the courtroom after he cheers “guilty” verdict Judge Timothy Walmsley asked Marcus Arbery Sr., the father of Ahmaud Arbery, to leave the courtroom after he reacted to the guilty verdict of Travis McMichael – the man who shot his son. Arbery exclaimed “Woohoo!” after the first guilty verdict END_OF_DOCUMENT_TOKEN_TO_BE_REPLACED

Come see me at my store’s Popup Shop at Selden Market in Norfolk, VA. PLEASE CALL TO CLAIM YOU FREE GIFT

A Texas school district is investigating a viral video of a white high school hitting a Black teacher. The clip, which was taken at Castleberry High School in Fort Worth, Texas and posted online over the weekend, showed a white girl stomping to the front of the classroom to confront the teacher as she tried to call the girl’s parents. The END_OF_DOCUMENT_TOKEN_TO_BE_REPLACED