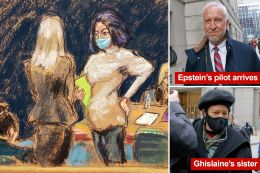 A woman testified on Tuesday about the sexual abuse she suffered at the hands of Ghislaine Maxwell and Jeffrey Epstein starting when she was just 14 — including being coaxed into group sex sessions at the pedophile’s Palm Beach mansion.

The alleged victim, an actress identified only by the pseudonym “Jane,” recalled hanging out at Epstein’s lavish home in the mid-1990s, when she and others, including Maxwell, would “abruptly” be summoned to his bedroom or a massage room.

“What would Maxwell typically do?” Assistant US Attorney Alison Moe asked.

The witness — one of four alleged victims mentioned in the indictment against Maxwell — was the first accuser to take the stand at the Manhattan trial, telling jurors how she became ensnared in the depraved pair’s web as a teenager and how she was repeatedly abused by them through the age of 16.

“I don’t know, but more than twice,” the woman said when asked how many times Maxwell was present when Epstein allegedly abused her.

“It’s hard to remember because I was abused pretty much every time I would go over to his house and it all started to seem the same after a while.”

Her voice broke as she described once being called to Epstein’s bedroom during a trip to New Mexico with the sick financier and Maxwell.

“Jane” said she was 14 when she met the British socialite and wealthy financier in the summer of 1994, when she was at Camp Interlochen in Michigan, between 7th and 8th grade. Her composer dad had died suddenly of leukemia about nine months earlier, and her family had lost their home.

She was sitting on a bench with her friends when a “tall, billowy” woman came over with a Yorkshire Terrier dog, and a man soon followed.

“[My] classmates left and I was there by myself eating my ice cream and the man sat across from me,” she said.

“He seemed very interested to know what I thought about the camp,” adding that he was a benefactor who gave musically gifted kids scholarships.

She identified the man and woman as Epstein and Maxwell.

“They seemed very friendly. I thought they were a married couple, they seemed inquisitive,” she continued.

Back home in Palm Beach, “Jane” said she and her mom were invited over to Epstein’s “enormous house” for tea.

“It wasn’t a pool house,” she quipped on the stand when asked to describe Epstein’s home. At the time, the accuser said, she lived in a pool house with her three brothers and her mom, whom she shared a bed with.

For months after, the woman said she would hang out at Epstein’s home every week or two on average, spending time by the pool, in the kitchen or going to the movies.

She described once seeing Maxwell and other women lounging by the pool “all topless and some of them were naked.”

“I was just shocked because I hadn’t seen that before,” the woman said.

The witness said she thought Maxwell was “a little bit odd and quirky,” adding that the older woman would sometimes tease her, and that she saw her as a sort of “older sister.”

“She would ask me what I was up to, if I had a boyfriend,” she testified, recalling how Maxwell once told her about dating, “Once you f–k them you can always f–k them again because they’re grandfathered in.”

She described how Epstein and Maxwell took her shopping, including one time to Victoria’s Secret, where they bought her white cotton briefs. Epstein also started giving her cash on her visits to his home, and also began paying for voice lessons and bought her clothes and “things for school.” Both he and Maxwell would also brag about their famous friends, name-dropping former presidents Donald Trump and Bill Clinton.

“Initially, I felt special,” she said about the attention they showered on her.

“It changed when the abuse started happening.”

Not long after the first assault, the woman alleged that both Epstein and Maxwell molested her in his bedroom.

“They moved me over to the bed and took their clothes off. And they started to sort of like fondle each other,” she said, adding that they were “casually giggling” as she stood there.

”In interactions following that incident, “Jane,” said the sick duo would lead her to a massage table inside a room at the house and show her how Epstein liked to be rubbed down. “During these incidents did Maxwell ever touch your body?” the prosecutor asked.

Ian Alexander Jr., the only son of renowned actress Regina King, has died by suicide. The Academy Award-winner confirmed the tragic news in a statement to PEOPLE END_OF_DOCUMENT_TOKEN_TO_BE_REPLACED