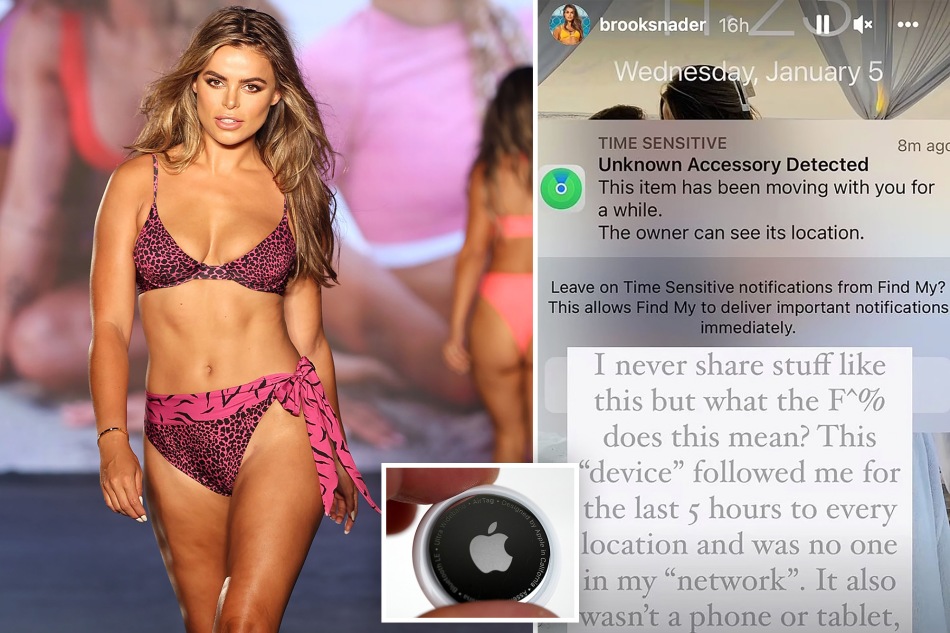 A swimsuit model says she was stalked by a stranger who slipped an Apple AirTag tracker into her coat pocket before following her for five hours.

Brooks Nader, 26, claims the disturbing incident occurred Wednesday night while she was out in New York City, and she only realized it when her iPhone alerted her to the fact that an “unknown accessory” was moving with her.

An AirTag — first released last April — is a nickel-size tracking device that acts as a key finder, with Apple users able to attach it to their personal items to make sure they never get lost.

However, there have been multiple reports that the gadgets, which retail from $29.99, have been placed by stalkers and thieves inside other people’s handbags, cars and pockets to track their whereabouts.

Nader appears to be the latest victim, with the model relaying her experience to her 827,000 followers on Instagram.

“This ‘device’ followed me for the last five hours to every location and [it belonged to] no one in my ‘network.’ It also wasn’t a phone or tablet, it was an ‘item,’” she explained.

The Sports Illustrated stunner subsequently shared a screenshot of an AirTag via Instagram Stories: “@Apple, did you take into consideration the danger and potentially fatal consequences this device has?”

She added: “For those asking, it’s not my AirTag, it’s someone randoms, who must have slipped it into my belongings while out. Thank you all for checking in and sending helpful articles. I want this to be a PSA to all my ladies to please please check your belongings.”

According to Apple, it could alternatively help prevent stalking by notifying people if they have an AirTag device on their person that isn’t registered to them.

“AirTag is designed to discourage unwanted tracking,” the tech company states on its website. “If someone else’s AirTag finds its way into your stuff, your iPhone will notice it’s traveling with you and send you an alert.”

The alert is what tipped Nader off to the fact an AirTag was in her coat pocket.

A spokesperson for Apple told The Post, “We take customer safety very seriously and are committed to AirTag’s privacy and security. AirTag is designed with a set of proactive features to discourage unwanted tracking — a first in the industry — and the Find My network includes a smart, tunable system with deterrents that applies to AirTag, as well as third-party products as part of the Find My network accessory program.”

They added, “We are raising the bar on privacy for our users and the industry, and hope others will follow.”

Nader is hardly the first woman to be stalked with the aid of Apple tech.

In Mississippi, a 27-year-old woman called police on Dec. 27 after receiving a notification on her iPhone that she had an unregistered AirTag on her person.

Also last month, a Maryland woman took to Twitter to share her disturbing tale of a stalker attaching an AirTag to her car before she left a bar in the early hours of the morning.

And, back in July, a Texas woman went viral on TikTok after revealing an AirTag had been placed in her purse and used by an unknown person to gauge her whereabouts.

They’ve been a useful tool in recent thefts, too, particularly carjacking. In such cases, thieves will attach an AirTag to a vehicle in a parking lot and wait until the car and driver head back to their homes — where crooks find themselves more out of public view and steal the car right out of the owners’ driveway.

Chicago West’s 4th birthday was a dramatic one, to say the least. After dad Kanye West accused mom Kim Kardashian of not END_OF_DOCUMENT_TOKEN_TO_BE_REPLACED